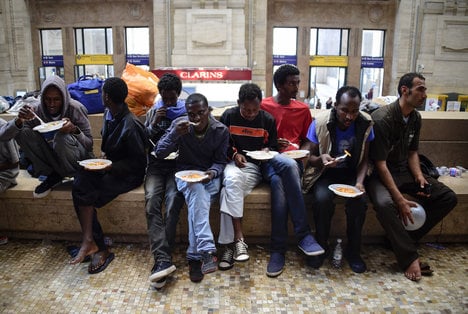 Milan Central and Rome's Tiburtina station were left looking like refugee camps at times this week as hundreds of migrants heading to northern Europe saw their progress delayed or halted by a temporary reintroduction of border controls due to Monday's summit of G7 leaders in Germany.

In Milan, more than 100 mostly women and children were moved from the station overnight to reception centres and local authorities were offering health checks to dozens of migrants still there on Friday amid concerns over the prevalence of scabies.

In Rome, migrants were reassembling near the site of a makeshift camp that had been forcibly cleared by police on Thursday.

The move followed protests from local businesses that the district was being turned into a no-go area because of security and sanitation issues linked to the presence of the mainly African refugees.

Giorgio Ciconali, a doctor working at Milan Central, told AFP: “There is a lot of scabies and it is being spread by them sleeping rough together, but there is nothing to worry about for people passing through the station.”

John, an 18-year-old Eritrean student, had been in the station for three days, and is hoping to get to Norway, via Switzerland and Germany. “But now it is very difficult to cross the border,” he said.

The Schengen open borders accord means migrants landing in Italy can usually easily travel through neighbouring France, Austria, Switzerland and Slovenia as they seek to make it to Britain, Germany and Scandinavia.

But the G7 suspension of Schengen and a growing numberof spot checks on buses and trains has made that harder, increasing the pressure on Italy, where reception facilities are at breaking point with some 76,000 people being accommodated nationwide.

Another Eritrean stranded in Milan was a 28-year-old called Million who was part of a group of migrants sleeping rough in the Porta Venezia district.

Million arrived in Italy by boat and made it to Switzerland but wasdetained there and flown back to Italy.

“That was the last time I remember having a proper meal, on the plane back to Italy,” he told AFP.

“I can't totally criticise the Italians because they have saved most of our lives (at sea). But now we are here, they do nothing for us.

“We are reduced to sleeping under bushes, eating biscuits and water and living like tramps. It's no kind of life, but if youhave been fingerprinted you can't go anywhere.”

Asked if he would consider returning to his homeland, he said: “They would jail us. You have to understand, Eritrea is like a dictatorship.”

Northern League leader Matteo Salvini blamed the station chaos on Prime Minister Matteo Renzi's failure to get other EU governments to take in some of the asylum-seekers.

“If the government had any balls they would go to Brussels and tell the EU they are not getting another cent from Italy until they recognise we are part of Europe.”

Foreign Minister Paolo Gentiloni admitted: “We have to fightin Europe for better results.”

“They want to move on to the north of Europe. But with the reintroduction of border controls, a bottleneck has been created. By Wednesday night we had 700 people here.”

Mary Stuart-Miller, a British expatriate who helps the Sant'Egidio religious community distribute meals to migrants and Italian homeless people who congregate around the station,said the camp had been established in early June mostly by Somalians and Eritreans.

“When you see how quickly it appeared from literally nowhere – it just goes to show what a time bomb the situation is.”

Bianca Maldifassi, a charity worker in Milan, said the situation there was getting worse.

“We're in June. But in a month's time you will see giant rats running around. The people basically sleep here and go to the toilet here.”