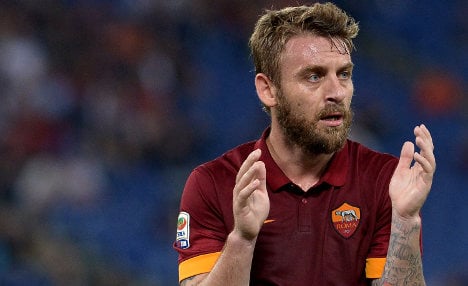 Midfielder De Rossi, who missed Friday's match in Split with an as yet unspecified injury, failed to pass a fitness test during training earlier on Sunday and has been ruled out of Tuesday's game in Geneva.

A statement by the Italian football federation (FIGC) said: “The Roma midfielder's evaluation by medical staff after training confirmed his unavailability for the match in Geneva, and he will leave the camp.”

De Silvestri, notably, is facing several months on the sidelines after suffering anterior cruciate knee ligament damage less than half an hour into the game. Reports on Sunday said he has already undergone surgery.

The result left Croatia top of Group H with their two-point lead on Italy intact and helped them the Azzurri avoid being overtaken by Norway, who were held to a scoreless draw in Oslo by Azerbaijan and remain third two points further adrift.

But Niko Kovac's men are in dire straits.

Croatia is sweating on possible Uefa sanctions in relation to the latest affair to embarrass the country's football federation (HNS) and blacken the reputation of the country's fans.

During Friday's game a giant swastika was visible on the pitch at the Poljud Stadium, the home of top Croatian league side Hajduk Split. It is believed to have been chemically-burned into the pitch and was still visible at the final whistle despite attempts by ground workers to remove it.

The incident, which is being investigated by police, is the latest in a long line – involving violence and racist behaviour – to have heaped embarrassment

Friday's game was played behind closed doors, in a virtually empty stadium as punishment for fan violence and racist incidents when Croatia played Norway earlier in the qualifying campaign.

Last November, fan violence and the throwing of rocket flares on to the pitch marred the Italy v Croatia qualifier at the San Siro stadium in Milan, which finished 1-1 following an interruption of several minutes.

A spokesman for the HNS, Tomislav Pacak, said of the swastika incident: “This was an obvious act of sabotage and a criminal act. We condemn it and ask the police and judicial bodies to find the person(s) responsible for what is a shame not only for Croatian football, but the entire country.”

A Uefa spokesman told AFP it was awaiting the reports of the referee and the body's match delegate before deciding whether to open an investigation.

Italy's absences, meanwhile, could prove costly ahead of meeting a Portugal side for whom Real Madrid striker Cristiano Ronaldo scored a hat-trick in their 3-2 Euro 2016 qualifying win away to Armenia.