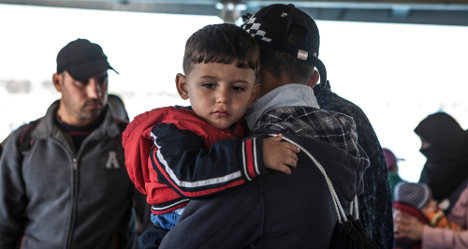 Italy is struggling to cope with an influx of 60,000 migrants so far this year. Jason Florio/Moas

“We have deployed our staff members only today to start working on the ground in Catania, Sicily,” Frontex deputy executive director Gil Arias-Fernandez told AFP in Warsaw.

Italy is struggling to cope with an influx of 60,000 migrants so far this year. Fleeing war or poverty, most arrive by sea from North Africa and many have died during the perilous journey in unsafe vessels run by people smuggling gangs.

“We hope that the other agencies will gradually deploy their staff or their liaison officers in the coming days and weeks,” Arias-Fernandez added, referring to the European Asylum Support Office, Eurojust, the UN Refugee Agency and the European Maritime Safety Agency.

Proposed by the European Commission, Frontex “hotspots” aim to pool the resources of all the agencies focused on migration and security to “work together and to create synergies,” he said.

“This is a new concept in the places where the situation of irregular migration is more dramatic, especially in the Mediterranean.”

European interior ministers failed to reach agreement Tuesday on plans to tackle the migrant crisis as Italy threatened a backlash if other EU states refuse to share the burden of asylum seekers.

The deadlock came as Italian police forcefully evicted dozens of mainly African migrants from their shelter under a railway bridge on the Franco-Italian border.

EU members are lukewarm about a European Commission proposal for quotas to redistribute 40,000 Syrian and Eritrean asylum-seekers who have arrived in Europe and resettle 20,000 Syrians living in camps outside Europe.

European leaders swore action after some 800 migrants died in a shipwreck in April.

It was the worst disaster yet in the Mediterranean in a year in which 1,800 people have died trying to reach Europe while more than 100,000 have arrived.