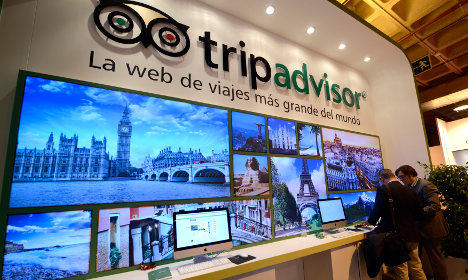 The fake restaurant profile has now been removed from the TripAdvisor website. Photo: Gerard Julien/AFP

The phoney profile was created by the Italian newspaper ‘Italia a Tavola’ with the help of restaurant owners to prove how easy it is for fraudsters to manipulate rankings on the US portal, which publishes user reviews for restaurants, hotels and tourist attractions.

After creating the profile for the imaginary restaurant, named ‘La Scaletta’, the conspirators set about leaving fake reviews. Even the telephone number they chose for the restaurant was fake – it was the number of the town’s old police station.

Within a month the establishment had secured the top spot in the list of the town’s restaurants. Despite receiving just ten “excellent” reviews, the restaurant overtook ‘L’Osteria H2O’, which boasts over 300 reviews, 201 of them “excellent”.

Just ten minutes after the restaurant was exposed as fake TripAdvisor deleted the comments, photographs and profile.

Describing the newspaper’s methods as “unethical”, the website told La Repubblica newspaper that the experiment was “meaningless” because it differed from the kind of fraud the site investigates on a daily basis.

Moreover, TripAdvisor insisted that it was “strongly dedicated to guaranteeing that the content on the portal offers a useful and reliable source of information for those who plan a trip anywhere in the world.”

Last August, the Italian hotels association Federalberghi complained when Tripadvisor continued to accept reviews for a hotel that had closed down in 2007.

And in December 2014 the Italian Antitrust Authority fined TripAdvisor €500,000 for improper commercial practices, complaining that the site had failed to adopt controls to stop false reviews, as well as promoting its content as “authentic and genuine”.