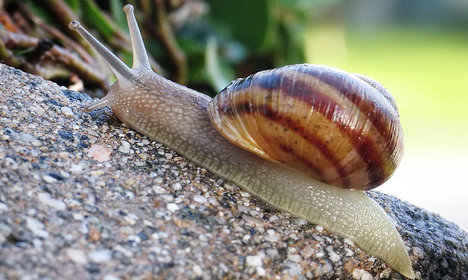 Would you like to rub this snail's slime over your face? Photo: Macrophile

Snails have long been a delicacy in Italian kitchens but the recent boom in snail slime products is a growing trend, and one that shows no signs of slowing down.

“Snail creams are our best-selling products and they are becoming very fashionable,” she told The Local.

But why are so many young Italians smearing snail slime over their faces?

“People are realizing that all these chemicals in cosmetics are no good,” says Anna.

This is hardly surpising in Italy, a country where many people have strong links to the land.

But what is snail slime? Snail slime, scientifically known as Helix Aspersa, is a mucus excreted from glands on the snail's body. But don't let that put you off – its properties are magical and intriguing. Best of all it's great for the skin.

For snails, slime functions both as an emollient that stops them from drying out, while simultaneously acting as a lubricant and a glue. Perfect for pesky gastropods who make use of it to scale your garden walls at 1.3cm a second and demolish your herb garden.

But it's also great for humans, too. Used cosmetically, it is believed to have many beneficial properties. Vitamin rich, snail slime is said to reduce scaring and wrinkles while improving the complexion. This is not modern knowledge either – snail slime has been used medicinally for millennia.

Snails were often used in ancient Greek medicine where their slime was administered as a syrup to cure gastrointestinal ulcers. The father of modern medicine, Hippocrates, would even crush them up with milk to make a cream to treat skin inflammations.

Before you go digging around in the garden for a DIY face-mask, it should be pointed out that the quality of snail slime depends on the environment in which the snail lives. Cerutti rears her snails organically, before harvesting and filtering the slime. She then passes the product over to biologists to be turned into skin creams.

But is it a passing fad, or a lasting trend? The scientific jury is still out, as definitive clinical trials have not been conducted.

However, Cerutti told The Local that dermatologists were increasingly reccomending snail slime creams to their patients. And a survey conducted by the Italian agricultural association Coldiretti found that 71 out of 100 Italians prefer naturally-made cosmetics.

Speaking on behalf of Coldiretti, Massimo Aliprandi welcomed the new craze. “What we are seeing more and more is the multi-dimensionality of Italian agriculture,” he told The Local.

No doubt the boom is great news for small scale Italian producers, but what about consumers? With average prices of €20 a pot, you too might be tempted to shell out some time soon.