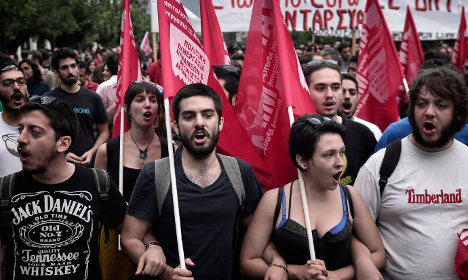 People march in central Athens for a 'NO' at referendum and for Greece's exit from the eurozone on Sunday. Photo: Louisa Gouliamaki/AFP

Led by lower bank stocks, the exchange shed 3.44 percent by mid-morning, with the biggest hits taken by Unicredit and Intesa, Ansa reported. Trading in both had to be suspended at certain points due to excessive volatility.

Meanwhile, Italy and Spain's borrowing costs on international bond markets soared at the start of trading on Monday because of the crisis.