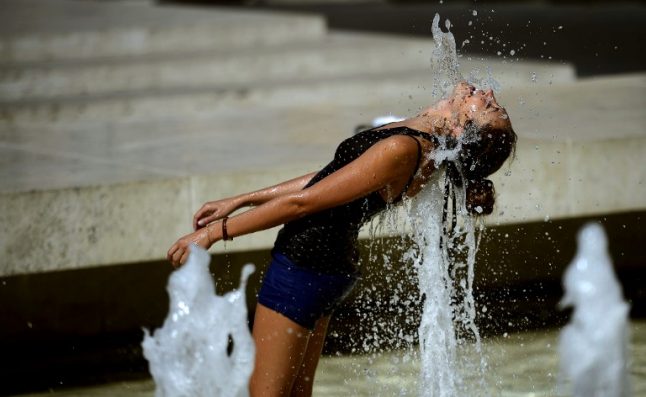 A tourist cools off in Rome. Photo: Filippo Monteforte / AFP

The cause of the latest period of hot weather is an African anticyclone that has been dubbed Flegetonte by meteorologists. The curiously named Flegetonte takes its name from a river of fire in the Greek underworld of Hades.

And depending on whether you're a hot house plant or not, Flegetonte's onmious arrival on Wednesday could well be hellish.

It is set to blast Italy with hot air, causing temperatures to reach between 35 and 39 degrees Celsius from north to south, Il Meteo reported.

It is predicted that the infernal Flegetonte will blast Italy for a week – causing a heatwave that will last until July 8th. The only rain will be the occasional, isolated downpour in Alpine regions.

The heatwave is likely to affect northern cities more. On Sunday, Il Meteo forecasts that temperatures could hit 37 degrees Celsius in Rome, 34 Celsius in northern Turin and Milan and a whopping 39 Celsius in Bolzano, all well above average highs for July.

Sunny Sicily could be a good place to head to avoid the heat this weekend, with temperatures remaining in the low thirties.

Meanwhile, Spain is also sweltering this week with highs of 44C expected on Monday. And in France temperatures will hit around 40C in the south west of France, with up to 35C in Paris on Monday.

The hottest temperature ever recorded in Italy for July was 46.2 degrees Celsius in Melito di porto salvo, Calabria, in 1983.