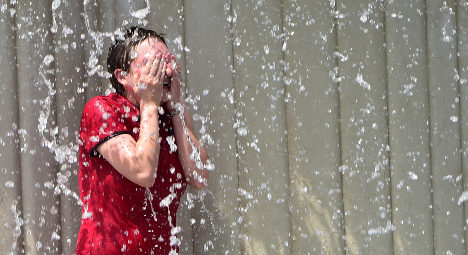 A tourist cools off in a fountain in Milan on July 4th. Photo: Giuseppe Cacace/AFP

Ansa reported that two cyclists from Bergamo died, along with three other elderly victims at beaches in the Emilia-Romagna region.

A 77-year-old also died while cycling with a group of friends in Chivasso, Piedmont, on Thursday, Fanpage.it reported.

The other victims included an 87-year-old man, who died on a beach in Imperia on Saturday morning, and another elderly man, who died while at the beach in Diano Marina, slightly further down the Ligurian coast, on Sunday morning, SanRemoNews.it reported.

Meanwhile, a 76-year-old woman collapsed and died while in the sea in Pescara, according to a report on GELocal.

The heatwave, which is expected to last until Wednesday, prompted the Italian Health Ministry on Monday to activate its summer telephone hotline – 1500 – for heat-related emergencies and advice.

A heatwave in 2012 was responsible for the deaths of 15 people in Italy, while 500 were hospitalized.

Meanwhile, 3,100 people died in Italy during a heatwave in 2003 that lasted for three months. The whole of Europe sweltered that summer, causing more than 20,000 deaths across the continent.