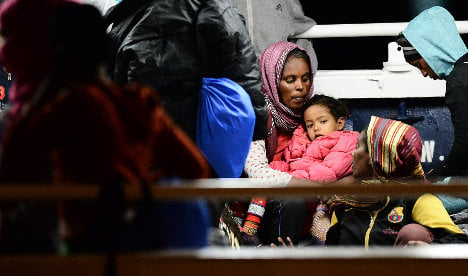 Migrants arriving at the Sicilian port of Augusta in June. Photo: Giovanni Isolino

The girl then fell into a coma and died during the journey from Egypt.

The shocking story was heard by the Italian coast guard on Friday when the Egyptian fishing boat carrying over 320 migrants arrived in the Sicilian port of Augusta. The boat had to be rescued after seven days on the water.

The father, who recounted the story to Sicilian prosecutors, tried in vain to keep the smugglers from tossing the bag into the water.

He then had to throw his daughter’s body overboard. The family had been making their way to Germany, where they hoped the girl would receive treatment.

The International Organization for Migration said last week that some 150,000 migrants and refugees have made the perilous journey across the Mediterranean to Europe so far this year, and more than 1,900 of them have been killed.