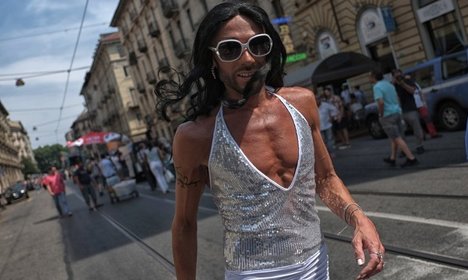 The decision comes after an appeal by the Lenford network of lawyers who work to defend lesbian, gay, transgender and bisexual rights.

The ruling was made at the end of an appeal on behalf of a 45-year-old transgender male, who in 1999 received permission to undergo a sex change operation but then decided not to go through with it.

His decision was based on the fact that after living as a woman for 25 years and undergoing various hormonal and cosmetic procedures, he already considered himself a female, without the need for further surgery.

But until now he was unable to be legally registered as a female. Courts in Piacenza and Bologna had rejected his previous attempts to legally become a woman, based on an Italian law that stated that a full sex change operation was a prerequisite for a legal gender change.

The ruling in Italy's highest court sets a new precedent for those who wish to legally change their sex, but don't feel he need for surgery.

In its ruling, the court stated that the desire to unite the body and the psyche was the result of “a hard fought individual psychological battle and medical treatments”.

For the court, these medical treatments do not necessarily mean a full sex change operation, but can include hormonal therapy and modifications to secondary sexual organs.

The ruling stated that changing sex was a complex issue and depended upon “different personality profiles and individual conditions”.

The president of the Lenford group, Maria Grazia Sangalli, said she was pleased with the ruling.

“In many cases hormonal therapy and operations on secondary sexual organs are enough to allow a person to feel harmony between their psychological and physical nature,” she told Giornale di Sicilia.

She went on to say that a full sex change brought with it “painful operations that have negative consequences in a high percentage of cases”.

The ruling was welcomed by LGBT associations. Arcigay and Equality said that the ruling accepted the right of self-determination for transgender people by simplifying the sex change procedure.