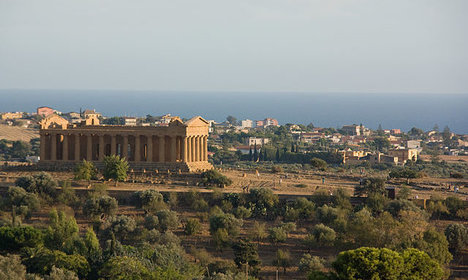 One of the temples in the valley where Monday's banquet will be held. Photo: Poudou 99

On Monday evening the stunning Greek ruins, a Unesco world heritage site, will be closed to tourists and cordoned off so that Google can lay on a plush banquet for its special guests.

Sicily was the chosen destination for the first edition of the conference in 2014 and Larry Page and Sergey Brin, the company's founders, were clearly seduced by the island's charms and chose to return this year.

The precise nature of the conference is highly secretive and the company has not published any information about it. The website for the event, called simply “the camp” is password protected.

In the past, “the camp” has been compared by the media to the World Economic Forum, which is held each year in Davos, Switzerland.

During the conference, which runs from Saturday to Thursday, around 300 elite guests, including company shareholders and celebrities, will bring their families to the plush €1,500-a-night Verdura golf resort in Sciacca, just outside Agrigento.

Once arrived, guests can enjoy a few days of sun, sea and sand while discussing global events that affect the future of Google.

Security will be tight. Port authorities in Sciacca told La Repubblica that ships would be forbidden to anchor, stop or fish within 500 meters of the shore along the stretch of coastline in front of the Verdura resort for the duration of the conference.

Last year, guests included luminaries such as David Beckham and Arianna Huffington. This year, it is rumoured that Bill Gates, Giorgio Armani and Luxottica's billionaire owner Leonardo Del Vecchio are among the invitees.