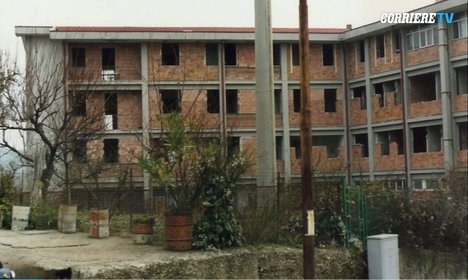 The video below from Corriere TV, in Italian, shows the empty wards and crumbling edifice of the hospital, on which work began 58 years ago.

The grand plans for the hospital envisaged a modern five-floor structure that would deliver state-of the-art medical care for the 35,000 inhabitants of the Fortore Valley, in Benevento, Campania.

The grandiose project included an operating theatre, an intensive care unit, a cardiology unit, and analysis labs, as well as gynaecology, pediatric, radiology and orthopedic departments.

Perhaps the plans for the super hospital were a little excessive for the local residents, but that was not the only strange thing about them.

The site chosen for the hospital lies at the top of a mountain that can only be reached by driving along a winding road full of potholes.

Even if it had ever opened, it would still be quicker for residents to go to nearby Foggia for treatment, a journey that takes about an hour by car.

With the strange location not being deemed a problem, the first stone was laid in 1962 and after a series of delays the structure was finally completed by the middle of the 1970s.

But subsequent revisions as to the precise function the hospital would serve meant that it never opened. Initial plans were for 133 beds, but this was then reduced to 90, then 49 and finally 20.

As the years went by and the eventual function of the hospital changed, so did the legislation. By now, so much time had elapsed that the majority of the fittings inside the hospital no longer conformed to health and safety laws, meaning the hospital couldn't be opened for business.

No problem. Contracts were tendered for the hospital's refurbishment and companies started (but never finished) fitting the hospital out with modern furnishings.

In a remarkably optimistic move, a heliport was even built just 300 meters from the hospital. Never used, it is now covered by sprouting weeds. But stranger than the heliport was the hiring of staff to work at the hospital.

In the mid-1990s, with works still in full swing, the local health authority hired 90 medical and administrative staff to work there, including local anesthetist Pietro De Vizio.

“There was an operating theatre, but not one where you could work,”  he told Corriere Dell Sera.  “I worked there for a few months but there was nothing there. Then I was transferred to another hospital.”

In spite of more than €19 million being invested to refurbish the hospital, constant legislative changes and structural problems blighted all attempts at opening the hospital.

De Vizio, the one-time employee of the ghost hospital, is pessimistic about its future. “I grew up with that hospital. I even asked to work there, dreaming it would open from one day to the next…now I'm retired,” he said. 

“With the emigration we've seen hit this region and the subsequent reduction in population, it's useless to even talk about the destiny of that hospital.”

The story is reminiscent of recent reports about a hotel in Sicily which, despite work beginning 61 years ago, has never welcomed a single guest.