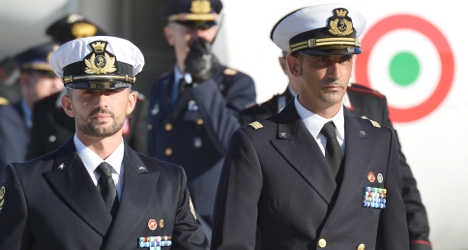 Two Italian marines serving aboard an oil tanker as part of an anti-piracy mission allegedly fired the shots that killed two Indian fishermen on a boat off India's southern Kerala state.

The Hamburg-based International Tribunal for the Law of the Sea said its president, Judge Vladimir Golitsyn, would on August 10th open a public hearing expected to last two days.

India detained the two marines days after the February 2012 shootings and a trial in its courts is pending.

Italy has argued the shooting occurred in international waters and should be dealt with under the UN Convention on the Law of the Sea.

In its request to the Hamburg tribunal, Italy demanded that “India shall refrain from taking or enforcing any judicial or administrative measures” against the marines.

It also asked that “restrictions on the liberty, security and movement of the marines be immediately lifted”.

One of the servicemen, Massimiliano Latorre, was last year allowed to temporarily return to Italy for medical treatment and is still there. The other, Salvatore Girone, has been living at Italy's embassy in New Delhi.

Italy, in its statement, said the MV Enrica Lexie “was transiting approximately 20.5 nautical miles off the coast of Kerala” en route from Sri Lanka to Djibouti at the time of the incident.

It said the radar of the Italian-flagged oil tanker then showed an unidentified craft about 2.8 nautical miles away and “heading rapidly towards the MV Enrica Lexie”.

The marines “assessed that it was on collision course with the Enrica Lexie and that this modus operandi was consistent with a pirate attack”, the Italian statement said.

Italian Foreign Minister Paolo Gentiloni on Monday confirmed “the government's commitment to defend the arguments of marines Massimiliano Latorre and Salvatore Girone at the international bodies we have decided to turn to”.