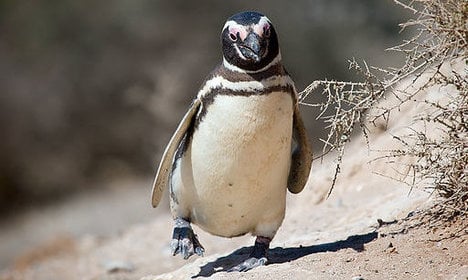 An adult penguin waddles in the wild. Photo: David

The shocking discovery was made after representatives from the anti-vivisection leagues Lav and Leal tipped off the local authority of Alessandria after visiting Colber circus in the town of Casalnoceto last Thursday.

“The penguins were found in the back of a refrigerated lorry, which was broken,” an employee at the Alessandria local authority, told The Local.

“It was 35 degrees Celsius inside. It's absolutely extraordinary. I've worked here since 1988 and I've never seen anything like it.”

In addition to the penguins, the authorities also confiscated a group of pelicans who were found in a small aviary containing just one tiny pool.

All the animals have been now placed in structures that are suitable to accommodate them.

A statement released by the president of Leal, Gianmarco Prampolini, said: “Penguins are social creatures which live in the freezing infinite spaces of the Antarctic. It is shameful that these animals were found in a fridge, from which they were only allowed out to perform in equatorial temperatures.”

Prompolini added that the circus had been reported to the police.