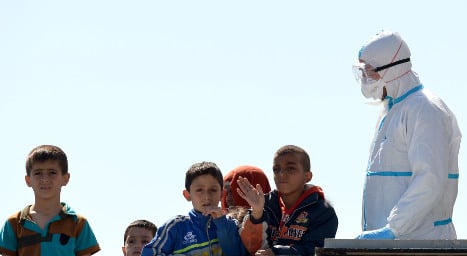 Of the almost 6,000 minors who landed on Italy’s shores during the first six months of this year, more than 3,830 arrived alone. Photo: Alberto Pizzoli/AFP

Virginia Giugno, a mother of two, is the chief of staff at Pozzallo’s town hall. Last year, she also became the legal guardian of over 800 children who arrived alone in the Ragusa town by boat.

She said that 2014 saw the highest number of unaccompanied children – around 1,000 – landing in Pozzallo, compared to just a handful in 2012.

Ranging in age from 12 to 16, they mostly came from Eritrea, Sudan, Egypt, Mali, Ghana and Ethiopia.

“They arrived traumatized, without family, alone,” she told The Local during a recent interview.

The town’s mayor, Luigi Ammatuna, called on his community, and specifically Giugno, to help.

As legal guardian, it was her duty to house the children in separate reception centres to adult refugees, or find them space in homes provided by the church or members of the community.

“It was easy to find people ready to welcome them,” Giugno said.

“We adopted them like our own. We took them to the beach, restaurants…we organized football matches and tried to integrate them.”

But shortly after arriving, many went missing without trace.

According to figures from Italy’s Foreign Ministry in May, 4,840 children had disappeared from reception centers across the country since last summer.

The government has set up a unit to deal with the cases of missing migrant children, with the aim of preventing them falling into criminal hands.

Of the almost 6,000 minors who landed on Italy’s shores during the first six months of this year, more than 3,830 arrived alone, according to estimates from the charity, Save the Children, in June.

The charity said that those missing were vulnerable to “manual labour, domestic work, drug smuggling and prostitution.”

Traumatized by their ordeal, Giugno has witnessed first-hand the emotions that come with young children who were forced to separate from their families in order to escape conflict and persecution.

But she also saw in them a strength and determination to survive.

“Some escaped before being systemized,” she said.

Despite fears for their safety, she added that “many arrived with a project to head on…to family and friends in northern Europe”.

“Those who had been through this experience had clearly changed their outlook on life. They were brave, strong…yes, they cried for their parents, but with great dignity.”

She added that the children did not concoct a “great escape” plan, they simply walked out of wherever they are staying.

Refugees cannot be held in reception centres by force, so if they want to leave little can be done to stop them.

“Our only hope is that they make it somewhere safe,” Giugno said.

“But there are groups out there exploiting this situation.”

In contrast to the anti-immigration stance adopted in some parts of the north, where regional leaders have refused to house refugees, nobody could accuse Pozzallo of indifference.

“Pozzallo has always been a door of Europe,” Giugno said.

“But in the last few years, it's changed. It's no longer an emergency in the sense that it's no longer a surprise, we know it's going to happen and so are better prepared.”

Of the children who do stay, most continue to live in reception centres until they are 18 or 21, she added.

“They go to school, they get educated. Some find jobs in the area.”

The community is leading by the example set by Mayor Luigi Ammatuna.

“When parents say goodbye to their children, they never see them again,” he told The Local.

“Many are escaping war, we're obliged to help. And people from Pozzallo understood they needed to help, even if they themselves were struggling.”