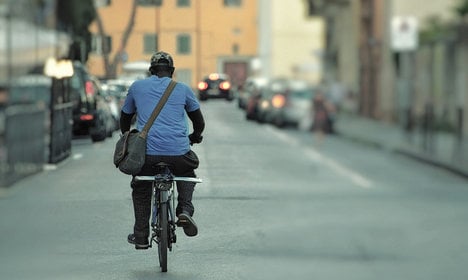 Lecce is cracking down on rogue cyclists. Photo: Armando G.Alonzo/Flickr

The misbehaving cyclist was hit with the fine in the city of Lecce, Puglia, for cycling against the traffic while speaking on a mobile phone.

The 34-year-old was stopped by a group of bike-mounted police officers, tasked with clamping down on deviant cyclists, who are causing chaos in the city.

At first, the cyclist ignored police requests to stop and turn around, something which proved to be a costly error as they then chased him down and issued him with the hefty fine for breaking the rules of the road.

While the picturesque city would seem like a perfect place to get around by bike, thanks to its modest size and favourable climate, it is not ideal for cyclists.

But the lack of cycle paths, cobbled streets of the centre and the poor example set by motorists does not mean that cyclists can flout the normal rules governing the circulation of traffic.

“There seems to be the false conviction that the highway code doesn't apply to bicycles,” local police chief Donato Zacheo told Repubblica.

“But bikes fall into the same category as other vehicles and are governed by the same rules conduct.”

But when it comes to flouting those rules, they’re clearly following the example set by motorists.

A survey earlier this year rated them as some of Europe’s scariest drivers.

Here's some insight into how this reputation came about: Why are Italians such crazy drivers?