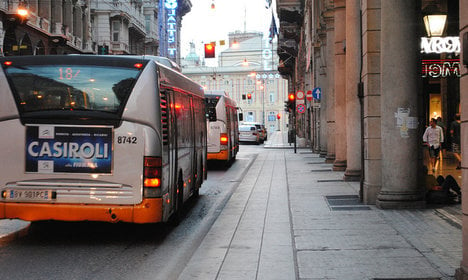 The men were attacked on a bus in Genoa. Photo: Rinaldo Mazzoni/Flickr

A 40-year-old-man and his friend were savagely attacked in July while returning home from a night out on a bus in Genoa.

“Perhaps it was his friend's eclectic look, or the fact that they were two men of the same age travelling together,” the 40-year-old's girlfriend told La Stampa, in an attempt to find some kind of motive for the assault.

A female passenger reportedly became aggressive towards him, and asked: “Are you looking at my boyfriend?” while showering him and his friend with homophobic insults.

The woman and her group of five friends then attacked both men, stamping on their hands, faces and backs. They also attacked them with chains, La Stampa reported.

The man and his friend eventually managed to free themselves from the shower of blows and got off the bus, battered and bruised, to take a taxi home.

But the attack left the 40-year-old with a cerebral hemorrhage.

Once home with his girlfriend, he brushed off her concerns, telling her that he was fine and didn't need to go to hospital. However, over the next week his condition deteriorated slowly.

A week later, he was rushed to Genoa's Villa Scassi hospital, where he was given emergency surgery and placed in a coma to save his life.

He has now re-emerged from the coma but can neither eat nor speak, and is still in a serious condition.

Following the random and brutal attack the public prosecutor's office has opened an attempted murder investigation.

So far the police have only charged the bus driver with aiding and abetting the thugs – as he allegedly failed to intervene during the attack.