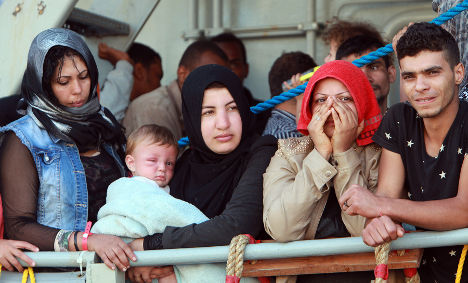 Their fishing boat, believed to have been carrying over 600 people, ran into difficulty about 15 nautical miles off Libya on Wednesday and overturned when rescuers neared, after frantic migrants rushed to one side in their desperation to be saved.

Irish patrol vessel Niamh, first on the scene of the disaster, was headed to Palermo with 367 survivors, including 12 women and 13 children, as well as 25 bodies recovered from the sea.

The Italian coastguard told AFP the search for remaining survivors “continued throughout the night and will be carried out all day today”.

Six migrants in need of urgent medical attention, including a feverish one-year-old baby and a man with a broken leg, were transported by helicopter to the Italian island of Lampedusa late Wednesday, according to the UN refugee agency UNHCR.

It is not the first time a boat making the perilous journey across the Mediterranean has overturned because of sudden movement onboard when help is in sight.

Many migrants cannot swim, making it a race against time for rescue workers trying to pull them from the water.

“It was a horrific sight, people desperately clinging to lifebelts, boats and anything they could, fighting for their lives, amidst people drowning, and those who had already died,” said Juan Matias, a project coordinator for Doctors Without Borders (MSF).

The MSF boat Dignity One was the second vessel on the scene and helped rescue panicking women, children and men. It was delayed, however, by being diverted en route to help another boat in trouble with 94 people aboard.

“The fact that we were first called to assist this boat and then shortly afterwards sent to another one highlights the severe lack of resources available for rescue operations,” Matias said.

More than 2,000 people have already died trying to cross the Mediterranean to Europe this year, according to the International Organization for Migration.

The government in Italy, one of the countries bearing the brunt of the crisis, has pleaded repeatedly for more resources to deal with the unremitting wave of boats from the coast of North Africa.

The MSF comments were echoed by the deputy director of the European Borders Agency Frontex, Gil Arias-Fernandez, who told El Mundo daily that there was a shortage of resources to prevent disasters, because countries were reluctant to lend equipment.

“We have the necessary money but we don't have the ships, planes and border guards in which to invest the money. We are not getting an adequate response from the European members to meet our needs,” he said.

The moment when the boat overturned and the migrants were tipped into the sea “was like being flung from a catapult,” Mohamed, a Palestinian farmer, told MSF in a story recounted in the Italian daily Corriere della Sera.

His daughter Azeel “disappeared under water, I could only see heads, all around, amid the waves, everyone pushing down on everyone else to try and stay afloat,” he said.

“A wall between me and my daughter, while my wife was gasping for breath.

“And I dived under, ready to die to safe my daughter,” he said, describing how he managed “I don't know how” to rescue her and pull his wife to a lifeboat as well.

Wednesday's disaster could be the worst in the Mediterranean since 800 migrants were feared drowned off Libya in April.