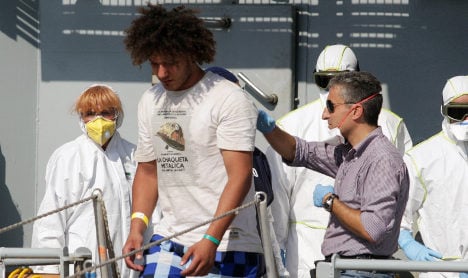 A suspected smuggler is helped off the Irish military vessel Niamh after its arrival in the port of Palermo on August 6th. Photo: Marcello Paternostro/AFP

Two Libyans, two Algerians and a Tunisian were held by police after survivors of the disaster were brought to Sicily, as testimony emerged as to how the suspects had beaten and stabbed passengers during the perilous crossing.

The alleged traffickers, aged between 21 and 24 years old, were accused by witnesses of “branding with their knives the heads of those who did not obey orders, particularly Africans, while those of Arab origin were thrashed with belts,” police said in a statement.

The overcrowded vessel was believed to have had more than 600 migrants onboard when it began the perilous journey across the Mediterranean, before getting into trouble and overturning.

Rescuers pulled 373 men, women and children from the water, and recovered 26 bodies. A search for further survivors proved fruitless.

Police said “the criminals each took on a clear role”, with one in charge and the others tasked with controlling the migrants through violence.

Survivors told them people from Africa had been put in the hold, and that “they could be closed in and compacted in the hull for three days, having paid half price for the crossing”.

When water began seeping in, “the migrants, on the traffickers' orders, tried desperately to get rid of it,” the police said.

When that failed “they did everything to try and get out to save themselves, but instead were attacked with knifes and sticks, pushed back into the hull”, at which point the traffickers “sealed the hatch, with the weight of the rest of the migrants, positioned on purpose to stop it reopening”.

The International Organization for Migration (IOM) said survivors told them that “up to 250 people had been forced to sit in the hold”.

The boat overturned as panicking migrants rushed to one side when they saw a rescue ship approaching.

“Those who could not get out in time would have drowned almost immediately,” it said.

According to the testimonies gathered from those brought to safety on Italian soil on Thursday – some still hoping to find relatives who disappeared as the boat sank – there were a significant number of Syrians on board, many travelling with young children.

Save the Children said three of the 25 bodies recovered from the sea were “very young” children.

“This latest maritime tragedy proves that, while extremely laudable, the search and rescue operations at sea cannot be the sole European response to this humanitarian disaster,” IOM Italy Chief of Mission Federico Soda said.

While noting that most incidents occurred before the European Border Agency's Triton Operation began covering international waters, the IOM said the risks of new shipwrecks remained.

“This incident shows that as long as there are no safe alternatives for migrants, criminal gangs will continue to pack people into unseaworthy vessels and we can expect more tragedies,” Soda said.

He called for “a wider and more holistic approach to the issue of irregular migration” to help understand “the underlying causes of the most significant movement of people since the end of World War II.”