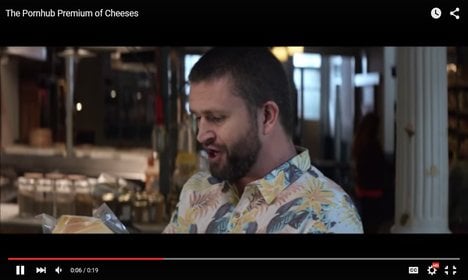 The short advert below depicts a middle-aged American couple in a supermarket.

The man suggests that they buy some “aged Parmigiano Reggiano” cheese.


The advert is part of a new campaign seeking to promote the site's premium pay service, which allows users to stream HD pornography.

But the consortium of Parmigiano Reggiano cheese makers is outraged and has accused the website of damaging their product by associating it with the adult entertainment site.

The problem is that the advert uses the name “Parmigiano Reggiano” to describe the cheese, which is protected by a Dop geographic label of origin, instead of using the generic “Parmesan” which can be used to describe a wide variety of cheeses.

In a note released by the consortium and published in La Repubblica, the cheese maker's association called the advert “vile and unacceptable,” saying that “it is offensive to the producers of the cheese.”

In the note, the cheese makers also announced they would be taking legal action over the ad.

“We are calling for immediate action from Italian and European authorities to protect the image of Parmigiano Reggiano.”