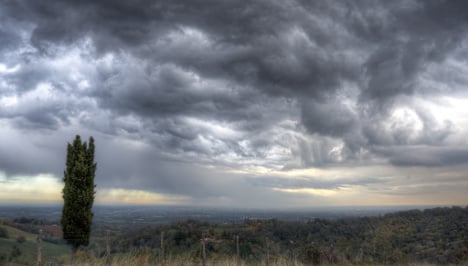 The storms marked the end of a long heatwave. Photo: Giorgio Galleoti

A 27-year-old man was killed after being hit on the head by a falling rock, which became loose in strong winds at an outdoor disco in Cilento, a town in the province of Salerno, while a 29-year-old man died after being swept away by a flood that hit the campsite he was staying at in Quittengo, Piedmont, Ansa reported.

Derik De Sannio disappeared in the Cervo river flooding on Sunday night; his body was found by rescue workers on Tuesday.

The storms wreaked havoc across the country, uprooting trees and causing transport delays.

In Palermo, a man was injured when a felled tree hit his scooter, while there was also flooding in Cefalù, east of the Sicilian capital.

Meanwhile, six people in a rubber dinghy were rescued by Italy's coast guard in stormy seas off the coast of Vieste in Puglia.

The storms marked the end of a heatwave that lasted more than a month.

The sunshine is forecast to return on Wednesday, although the bad weather is expected to make a comeback after the Ferragosto holiday on August 15th.