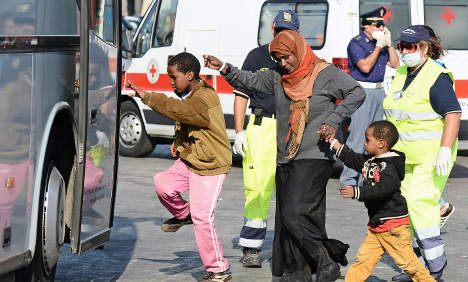 Around 224,000 migrants fleeing war and hunger have arrived in Europe by sea since January. Photo: Giovanni Isolino/AFP

The “Siem Pilot” docked at the port of Catania shortly after 11am (9am GMT) and an hour later the first batch of survivors began making their way tentatively down gangways on the side of the giant red vessel.

A medical team had gone on board to carry out initial checks on the traumatized migrants.

A total of 313 people, including at least three children, survived Saturday's sinking of an overcrowded fishing boat in which 49 people died from asphyxiation after being overcome by fuel fumes in the hold.

The “Siem Pilot” was also carrying 103 migrants rescued by a German ship after setting off from Libya on an overcrowded rubber dinghy.

Catania mayor Enzo Bianco has declared on Tuesday a day of mourning and has said the city will provide space in its cemetries for the victims to be given decent burials.

Hundreds of other rescued migrants were expected to be disembarked at other ports across southern Italy on Monday.

Among them were 354 people, including dozens of women and children, and one corpse deposited by a Croatian patrol boat at Reggio Calabria on the toe of the Italian mainland, the coastguard said.

Humanitarian organizations say the influx is being driven largely by conflict and repression in east Africa and the Middle East and have urged European governments to do more to create safer routes for asylum seekers to reach Europe.