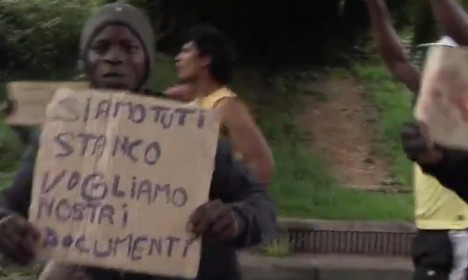 About 150 asylum seekers protested in the outskirts of Milan. Photo: YouReporter.it

Holding pieces of cardboard saying “we're tired, we want our documents”, they also called for Italy to give them residency permits, Corriere reported.

The impromptu demonstration was captured below.

Traffic ground to a halt as the asylum seekers protested on viale Fulvio for almost two hours on Monday morning, before returning to the centre in Bresso, in Milan’s northern outskirts.

They also protested over being made to sleep in tents, with up to eight people, which had had been set up by the centre and became waterlogged after heavy rain last week, Corriere said.

The protest followed a weekend in which Italy's coastguard picked up another 4,700 migrants.

The latest arrivals will lift to more than 108,000 the number of asylum seekers and other migrants to have arrived in Italy this year.

Italy’s Foreign Minister Paolo Gentiloni said on Sunday that the deepening migrant crisis is threatening to rip the “soul” out of the European Union.

He said the kind of chaotic scenes witnessed this weekend at the Greece-Macedonia border represented a real threat to the free movement of people across the bloc.

“On immigration, Europe is in danger of displaying the worst of itself: selfishness, haphazard decision-making and rows between member states,” Gentiloni told Il Messaggero.

Gentiloni urged Italy's EU partners to stop squabbling and start working on a common solution to the crisis.