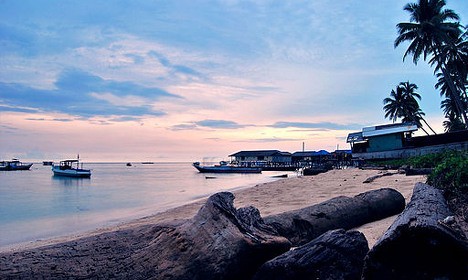 The divers have not been seen since they went diving near the island of Sangalaki, in the Derewan Island chain. Photo: Riza Nugraha

Daniele Buresta, 36, Michela Caresani, 33, Alberto Mastrogiuseppe, 33, and Belgian tourist Vana Chris Vanpuyvelde, 29, have not been seen since they went diving near the island of Sangalaki, in the Derewan Island chain in East Kalimantan on August 15th.

Indonesian authorities extended their intensive search for the missing divers but operations were due to end on Tuesday.

As the desperate families wait for news of their loved ones, Claudia Mastrogiuseppe, sister of Alberto, questioned the behavior of a tour guide who sounded the alarm on the day they disappeared.

“The guide said the dive was done in a correct manner and that the guys came up with him, but the boat was not there when they came up,” Claudia Mastrogiuseppe told Corriere della Sera in a TV interview on the Italian daily's website.

“After waiting for an hour and seeing nobody, he said he suggested going for help. Everyone knows that the guide should never abandon the group.

“The guide left. He swam for two hours against the current and was saved by a colleague. He wasn’t sick, he only had a cramp. But he should have taken the boat back immediately to look for the guys. He didn’t do that.”

She has set up a Facebook page entitled “Help us to find Alberto in Indonesia” and appealed for financial donations to prolong the search.

“The incident remains a mystery because the forces deployed in the area – helicopters, around 30 boats, divers and land searches – covering a surface of 1,000 nautical miles, have found no trace of the guys’ personal belongings,” she said on the Facebook page.

“The time available to save the guys is becoming ever more tighter. In the meantime a delegation of relatives is being organized to go to the island.”

Indonesia is a popular scuba diving destination, but several accidents have been reported in recent years.

Two of seven Japanese divers were killed in a diving trip off the resort island of Bali in February last year.