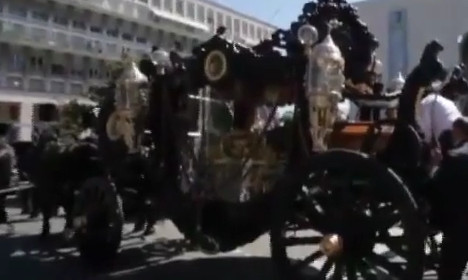 The body of Vittorio Casamonica, 65, was brought to the church in a horse-drawn carriage. Screengrab: La Presse

Two members of a camera crew from the current affairs show, Agorà, were threatened while filming last Friday in the Appio area of Rome, where several members of the Casamonica family live.

In a separate incident a journalist was also threatened while filming near Naples at the weekend.

The TV journalists said they were stopped by local residents and threatened with violence if they did not stop filming.

Journalist Alfonso Luliano said that when he and his cameraman were checking their footage they were surrounded by a dozen aggressive people who told them to leave.

“One man threatened to kill me saying repeatedly ‘I will kill you if you don’t give me the camera’,” Luliano told Italian media. “Without the intervention of the police it would have been worse.”

The camera operator was slightly injured, while two people reportedly linked to Casamonica’s family were arrested after allegedly seizing the journalists’ phones.

Meanwhile, police turned out in force on Wednesday morning as a second memorial mass was being held in honour of the late mafia boss on the outskirts of Rome.

The funeral ceremony held at San Giovanni Bosco church on 21st August provoked uproar across the country and furious debate in Rome about who had granted permission for the service to be held at the Catholic church.

A horse-drawn gilded carriage carried the coffin, a live band played the theme from ‘The Godfather’ classic, and a helicopter dropped rose petals overhead.

Afer the attack on the Rome journalists, Alessio Viscardi, a reporter for the web newspaper Fanpage.it, was also attacked in Terzigno, near Naples, while searching for the location where the helicopter had apparently taken off.

After taking a few shots of the airfield, Viscardi said he was approached by four people, who photographed his documents and threw him to the ground.

Viscardi has released video of one of the attackers, saying: “I will really kill you” as they try and wrestle the camera from him.

“But this action confirms that the Casamonica family and mafia criminals and their associates believe they are bosses of their area,” he told Italian media. “I say they will be under the eyes of the law. Everyone has to do their part, the council and law enforcement agencies.”

Luigi de Magistris, the mayor of Naples, expressed his support for Viscardi, saying: “It is unacceptable that a journalist is threatened with death.”