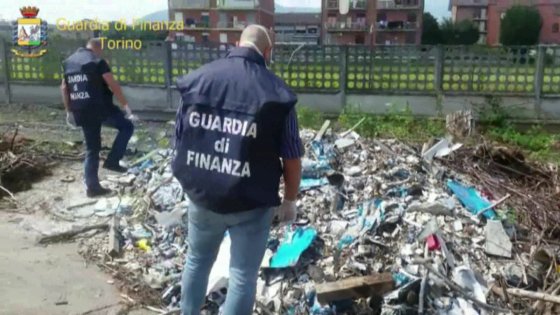 The 450-tonne pile was discovered in and around the abandoned factory on a 5,000 square meter site, just behind a residential area.

The discovery, made by police and representatives from Arpa, the regional environmental agency, late last week, included 430 tonnes of building rubble, 12 tonnes of asbestos and six tonnes of chemicals.

The majority of the waste had been placed there by the demolition company that currently owns the site.

But police told La Repubblica that some of the waste had been dumped by the site's previous owner, a company that went bankrupt in 2006 and had been responsible for decommissioning a local factory.

The current owner has been charged with illegally disposing waste materials and carrying out demolitions without the required permits.

The huge find has drawn comparisons with the so-called Land of Fires, an area around Naples and Caserta in the southern Campania region, where toxic waste has been dumped by the mafia since the 1990s.

In July, the European Court of Justice hit Italy with a €20 million fine for failing to resolve waste management problems in the region.

The Land of Fires gets its name from the high number of uncontrolled fires that break out in the area due to the uncontrolled dumping.

Speaking to La Repubblica, Italy's Environment Minister, Gian Luca Galletti, promised that police would continue to crack down on environmental crimes to “free Italy from polluters.”