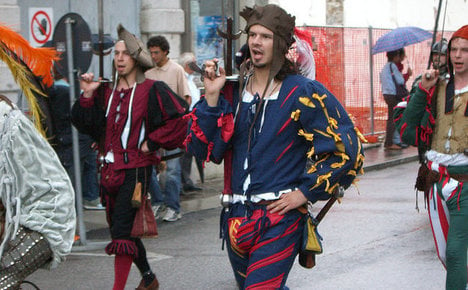 The two men died during a historical re-enactment in Potenza (not the one pictured). Photo: Marvin/Flickr

The incident happened over the weekend in the medieval suburb of Dragonara, where the theatrical re-enactment was taking place as part of the annual end of summer festivities, La Repubblica reported.

The re-enactment intended to tell the story of a local highwayman who operated in the area in 1864, but disaster struck when one of the period firearms exploded during the show.

A five-year-old boy was rushed to hospital for surgery after being hit by shrapnel in his lung, diaphragm and liver. The child is still in a serious condition, La Repubblica said.

Other spectators were treated by paramedics at the scene for minor injuries.

The mayor of Potenza, Dario De Luca ,visited those injured in hospital and has declared that the day of the funerals will be a day of mourning for the city.

Police are investigating what caused the incident.