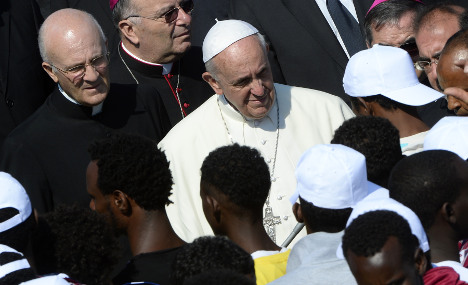 Pope Francis speaks to migrants during a visit to Lampedusa in 2013. Photo: Andreas Solaro/AFP

Francis, giving the Angelus blessing in Saint Peter's Square on Sunday, urged “every parish, every religious community, every monastery, every sanctuary in Europe” to take in migrants in need.

Some see the proposal as over-ambitious but many groups called it a useful blueprint that draws on the formidable organising skills of the Catholic Church.

“There are tens of thousands of parishes in Europe,” said Father Peter Balleis, international director of the Jesuit Refugee Service (JRS).

“And in each one, hundreds of families are able to organize and take turns welcoming refugees.”

According to the UN refugee agency, it takes about six to eight months to process an asylum application in Europe, sometimes longer if legal issues arise. During this time, many refugees are in desperate need of a place to stay.

The JRS has already been working with refugees looking for a temporary home, and plans to expand its efforts.

Five years ago the group launched a programme in the Paris area called “Welcome”, under which around a hundred families and religious communities house refugee families for five weeks.

The programme has been successful in helping migrants integrate and is now being rolled out to several other French cities, as well as to other countries, such as Spain.

JRS says the five-week time limit is to encourage the refugees to be independent – without leaving any of the refugees on the street.

“After a while, you need the person to enter into the society” of the host country, said Jean-Marie Carriere, regional director of the JRS.

Other European communities have also already welcomed thousands of asylum seekers and are preparing for more.

Cardinal Angelo Bagnasco, chairman of the Italian bishops' conference, told the country's La Repubblica daily there was evidence “of an important movement in all dioceses”.

Italy's Catholic organizations have already taken in between 15,000 and 20,000 asylum seekers.

In Austria too, dioceses have offered thousands of places for migrants to stay and several have announced plans to do more.

Pannonhalma Abbey in northwest Hungary, which is run by the Benedictine Order, has also opened its doors to Syrian families trekking across the country to western Europe, and said it is prepared to repeat the experience.

Carlotta Sami, spokesperson in Italy for the UN refugee agency, said that the pope's calls to action supported the agency's goals.

“The pope's voice has helped us for years to strongly support the welcome of those fleeing war and violence,” she said.

One detail the pope didn't mention in his appeal is that the majority of the 336,000 migrants who arrived this year on Europe's shores are Muslim.

Father Balleis saw it as a chance for foreign and local families to “get to know and understand” one another.

The Catholic Church isn't the only church appealing for greater solidarity.

The archbishop of the Finnish Lutheran Church, Kari Mäkinen, called Saturday for the country's parishes to open up their centres for retreats and summer activities to refugees.

There has also been an outpouring of solidarity from groups with no religious affiliation, in Germany and elsewhere.

In France, the Singa foundation said it had received more than 1,000 offers of accommodation in just a few days, and in the UK more than 2,000 residents have said they are ready to welcome refugees as well.