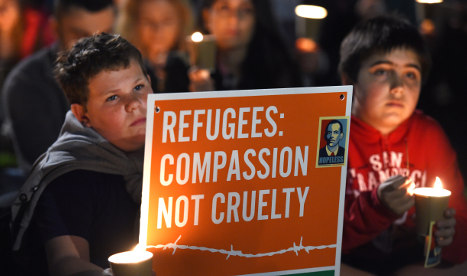 The UNHCR has appealed to Italy’s millionaires to donate towards the refugee crisis. Photo: William West/AFP

The agency said that if just one percent of those in the country who have €1 million or more each gave €15,000, then 22,000 Syrian families could be helped.

Some 219,000 Italians fall into that bracket of wealth, according to figures from the World Wealth Report 2015.

“It’s now clear to everyone that we’re facing an epochal crisis,” Federico Clementi, fundraising executive for UNHCR Italy, said in a statement.

“We are convinced that this is a historical phase during which all individuals, especially those in a strong economic position, should take responsibility to improve the conditions of thousands of families who would otherwise have no choice but to rely on human traffickers.”

Clementi added that now is the time to “send out a strong signal of humanity and generosity”.

More than 365,000 people, the majority being Syrian refugees fleeing war, have crossed the Mediterranean so far this year.

Some of Europe’s wealthiest people have come forward with offers of help and donations since the picture of a three-year-old Syrian boy, whose body was washed up on a Turkish beach, caused a media sensation last week, prompting the EU to open its doors more.

Football clubs across Europe have also launched fundraising initiatives, including AS Roma, which on Monday said it would kick things off with a “large donation” from club president, James Pallotta.

Meanwhile, an aristocrat from one of Spain's wealthiest families revealed on Monday that two refugee families have been living in his palace near Seville for the last 18 months.