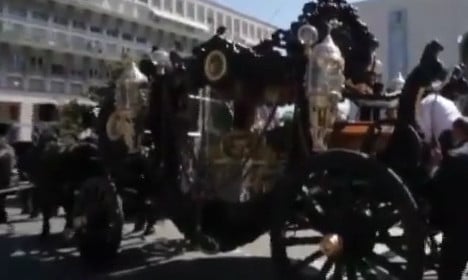 Vera Casamonica has further enraged Italy’s politicians by appearing on a show aired by the state-owned TV station, Rai, to defend her father’s funeral while comparing him to the much-loved leader of the Catholic Church.

She said on the show, Porta a Porta, that her father was “a good father, like Pope Francis”.

The ostentatious send-off in August included a horse-drawn gilded carriage and a live band which played the theme from ‘The Godfather’ film, as rose petals were thrown from a helicopter overhead.

“I would do the same again,” she said.

The helicopter pilot was suspended for flying low over the city and dropping the petals.

“How were we to know he couldn’t do that? It was up to him to tell us it was forbidden.”

Of the choice of The Godfather theme music, she added: “My father liked that film and the song, we just carried out his wish.”

A picture of her father, seemingly dressed like a pope, was also pinned to the wall of Don Bosco church, where the funeral was held.

“He was not dressed like a pope. He was wearing blue trousers that maybe you didn't see. Perhaps you misinterpreted that image.”

His grandson, Vittorino, also appeared on the show, and denied Casamonica was a mafia boss.

“He was only head of our family, not anyone else's.”

Politicians from Italy's Democratic Party demanded to know how the family came to appear on state-owned TV and called on leaders in Rome and Lazio to investigate.

In a statement published by Ansa, they said: “It was a disgraceful and offensive spectacle for Rome citizens in the first place, and now to all Italians, who had to listen to members of the Casamonica family on a TV show funded by taxpayers, make comparisons with Church leaders.”

The statement added that the funeral was an insult to all those trying to “fight against the mafia and illegality” and who risk their lives in doing so.

The funeral, held on August 20th, infuriated leaders of a city already embroiled in a mafia-linked corruption scandal.

Interior Minister Angelino Alfano and Rome Mayor Ignazio Marino said it was a “ despicable spectacle”, while the city’s police chief admitted at the time to a “failure in the system”.

A day before the funeral a judge had set the date for the trial of 59 people charged in relation to graft around the awarding of city contracts.

Although he was never convicted of being a mafia don, the 65-year-old – who died of cancer – was the alleged head of Casamonica clan, which reportedly runs drugs, fraud and extortion rings in Rome.

The clan – which has its roots in the Roma community – is one of crime networks accused of infiltrating the city's government and influencing politicians in a spiralling corruption investigation.