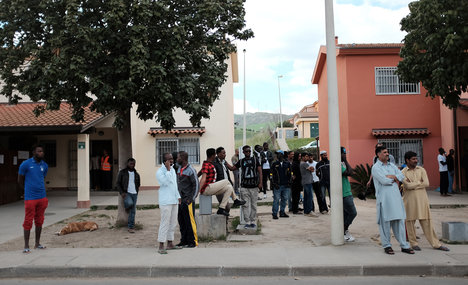 The grisly murder of a local couple and subsequent arrest of an Ivory Coast man from the Sicilian centre sparked an outcry in a country tired of being on the frontline of Europe's largest refugee crisis since World War II.

The vast complex, a former US military base with streets evoking American suburbia, currently shelters just over 3,000 asylum seekers – down from nearly 4,000 in the past, but still too many, critics demanding its closure say.

“How do you control 4,000 migrants? The centre becomes a town in itself, which doesn't help integration,” said Anna Aloisi, mayor of the nearby town of Mineo, perched high above the centre.

Beyond 10-foot razor wire fences, migrants divided by ethnicity and religion live in 403 yellow and pink houses, sleeping several to a room on foam mattress, eating in the canteen or cooking over small electric stoves in their back gardens.

The community is cut off from the rest of the world: for miles around, there is nothing but fields, orange groves, dust.

“There's talk of prostitution, of drug trafficking, there is certainly a lively black market,” Angela Lupo, a legal adviser for the Italian Council for Refugees (CIR) told AFP.

“The residents sell clothes, food, cigarettes and phonecards at bazaars dotted around the centre, there's even an illicit restaurant and a migrant-run taxi service. The controls are few and far between,” she said.

Adawiah, a 23-year-old from Ghana who filed his request for asylum nearly 12 months ago, pleaded to be released from the limbo he lives in: “We make the life we can, we have a message for Italy, 'You must do more, quickly, please.'”

Revelations that organised crime groups had infiltrated the centre's management left the government red-faced and minister Maria Elena Boschi promised parliament this week the camp was under review and closure was an option.

Countries such as Britain, France and Germany have urged the EU to set up further centres in Italy and Greece to fingerprint migrants and help separate asylum-seekers fleeing war from those motivated by economic reasons.

European Commission President Jean-Claude Juncker this week detailed a plan under which Italy would open five so-called hotspots in its southern regions. But critics say human rights are at risk and the big camp model is not the answer.

“Mineo is a town of 5,000 people, but many of them are elderly and there are few youngsters. So the arrival of coloured migrants, all of them young, who hang around doing nothing, often make the townsfolk afraid,” said mayor Aloisi, a member of Italy's New Centre Right party.

Elderly men sitting on benches in the town's cobbled square watch silently as Nigerians and Gambians barely out of their teens stroll past to a betting shop. Residents of the centre get 2.50 euro ($2.80) a day pocket money.

Maurizio Nalfo, a local who works for the forestry service but has not been paid in months, said the asylum seekers weren't seen as the problem by residents, “It's politics which creates the disparity between Italians and migrants.”

It's a familiar tale, echoed across recession-hit Italy. “The citizens see the migrants are taken care of, have a hot meal, a roof over their heads, when they struggle to have a hot meal themselves, it sparks jealousies, anger,” Aloisi said.

The centre's director Sebastiano Maccarrone, 51, who previously worked at the infamous reception centre on the island of Lampedusa – closed in 2013 due to the dire conditions inside – insisted he has everything under control.

But CIR says many residents see little of the services which state funding should ensure – Italian lessons, legal help, medical care – and can only play football while waiting for their paperwork to be handled, which can take two years.

As the crisis intensified across Europe, Pope Francis called last week for Christian parishes to take in refugees — a sentiment applauded by those in favour of doing away with unwieldy centres, as well as the migrants themselves.

“We don't have job, we don't do anything, we stay all day in the camp,” said Nigerian Bright Aghama, 31, a regular at the centre's church, which has been situated some distance from the site's makeshift mosque.

Bright, who has been in the centre for over a year, said despite the daily struggle with boredom and uncertainty over the future, he was grateful for “a place where I can lay my head, where I can have peace of mind.”