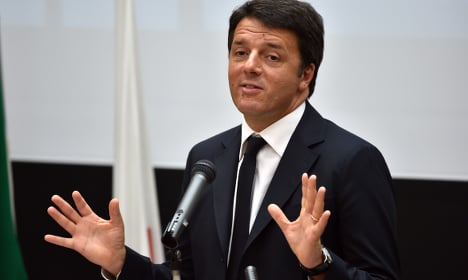 Renzi, who is preparing tax and spending cuts for a 2016 budget due to be unveiled in October, said the Eurozone's third-biggest economy was finally set to accelerate after years of stagnation or worse.

“I say it without any problem and based on the figures: Italy has turned the corner. Full stop.” Renzi said in an interview with daily Il Foglio.

“The economy is taking off and spending is growing. Something is changing.”

Renzi's bullish comments follow recent encouraging economic data, including falling unemployment, an unexpectedly high 2.7-percent jump in industrial output in July (compared to the same month in 2014) and a spike in mortgage applications in the first seven months of the year.

The premier said Friday the data would likely mean upwards revisions to the government's forecasts of 0.7 percent growth this year and 1.4 percent in 2016.

“There has been a little positive data but it is risky to talk of recovery,” the Confindustria president said. “Let's hope these figures are confirmed in the coming months.”

Renzi reiterated that Italy would keep its budget deficit under the EU’s ceiling of three percent of GDP but make use of the maximum margin of flexibility allowed under the rules.

“Spending reform is a priority for me,” he insisted. “But it is foolish to say taxes can only be cut through spending cuts.

“That is not and will not be the road for Italy,” he said, citing Britain as an example of a country that had allowed its deficit to rise to fund growth-friendly tax cuts.

“We will not breach the three percent,” he said. “But we will use the flexibility provided for in the (EU rules) fiscal compact, which thanks to our work in Europe is no longer impossible to use.”

Renzi said a flexible application of the rules would give Italy a margin of manoeuvre equivalent to one percent of GDP, which could be allocated to investment and structural reforms.

“It means that while remaining under the three percent next year there will be up to 17 billion for us,” he said.

“And this is not a gift that falls from the sky: it is the product of a battle we have fought and are winning in Europe.”