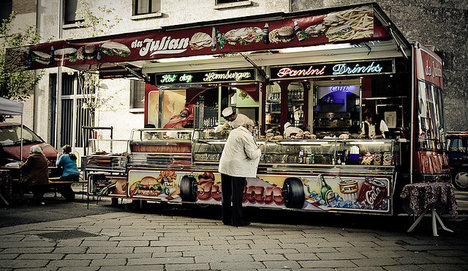 The app, Streeteat, was released in Italy this May and has since been downloaded more than 10,000 times.

After it's initial success the app hopes to launch its services in Spain and the UK later this year and could well expand to Germany and Switzerland shortly after.

“The app geo-localizes food trucks across Italy, allowing users to easily find a bite to eat on the go,” CEO and founder Giuseppe Castronovo told The Local.

“But that's not all. The app also allows users to check each food truck's menu, prices, leave their own reviews, and share their own photos of the food.”

Quality is perhaps not a word normally associated with food trucks, which are often considered unhygienic and unhealthy. But Streeteat is based on the principle that the street food sector is changing fast, representing a great opportunity for restaurateurs and entrepreneurs in Europe.

According to the FAO, some 2.5 billion people munch street food every day and today's street food consumers are an eclectic mix of discerning punters. Street food fairs are now a regular occourance in cities around the globe. “We will also use the data we gather to provide expert advice to food truck owners and entrepreneurs looking to start in the industry. We are also launching a news service which will also allow users to contact vendors in order to ask them to provide catering for private events,” Castronovo explained.

Hailing from the sun-kissed Italian island of Sicily, Casronovo is no stranger to street food. The island is home to some of Italy's most gourmand cibo di strada, such as chickpea fritters, bread with spleen and even horse meat sandwiches.

But in spite of his Sicilian roots Castronovo is convinced that his adoptive city of Milan has been central to Streeteat's quick launch and rapid rise.

“For me, Milan is the best Italian city in which to do business. It's a very European city that's full of working professionals. It would have been very difficult to set this up in Florence or Sicily.”

Streeteat currently has a staff of three and employs seven other people externally. The creation and maintenance of the app was fully outsourced – which meant an initial private investment of €150,000 was needed to set up the project.

However, should the expansion goes well – that cost will be a snip. Streeteat looks set to revolutionize the world street food and could bring some new and exotic flavours to your doorstep sometime soon.

In spite of Italy's well documented problems of high taxes and lengthy bureaucracy, Streeteat was set up in three months and will launch internationally within it's first year of operation – something Castronovo thinks might help change people's opinions about doing business in Italy.

“When I began I didn't have a clear model or exact business plan – I was just working with energy and enjoying myself. You just have to be hungry to succeed.”