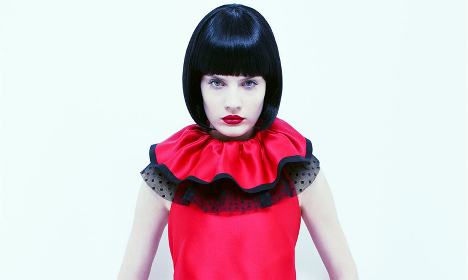 On the basis of her eye-catching debut Milan catwalk show on Saturday, Shely wants her customers to be dreaming of California — or a late 1980s nightclub thumping to the beat of S'Express.

The acid house pioneers' DJ leader Mark Moore may have been the last person to be seen sporting something akin to the oversized puffy marabou feather jacket that Shely made the centrepiece of her show at the Teatro Armani.

Orange bandanas and matching hotpants or bellbottom flares either side of halterneck bra-tops continued the rave theme in a collection where the brightness knob had been turned up to 11.

The winner of last year's Vogue Italia's “Who's on Next” prize, Shely was parading her wears at Giorgio Armani's state-of-the-art Milan headquarters after being chosen as the latest beneficiary of the veteran designer's scheme to help young talent get exposed to the international spotlight.

Previous recipients of the award, now in its 10th season, include Haitian-Italian designer Stella Jean, Au Jour le Jour's Diego Marquez and Mirko Fontana, and Angelos Bratis — all of whom have considerably grown their business and their profiles in the aftermath of their Armani patronage.

Shely said the challenge of following in the wake of such creative talents had been daunting.

“First of all it was a big responsibility for me,” she told AFP backstage after the show. “Because first of all, to get that chance to show your collection in Teatro Armani, the home of such a legend designer… I felt so stressed.

“I really felt like 'I must do something special to show I deserved it'.

“It was a big surprise and I had a very short time to organise myself. But already I had created my collection as I had dreamed it would be on the catwalk, so it was not so difficult. I didn't need to change anything.”

Shely, 30, says she took her cue from a mood board created from hundreds of aerial pictures of crowded summer beaches. From on high, colours can blend into each other, creating unexpected shades which Shely attempted to recreate in her collection.

“All the mood of the collection starts from the aerial photography,” she said. ” The final styling was to create a kind of Californian girl mood: very colourful and very fresh.”

Born and raised in Israel, Shely has been in Milan since coming to study design here in 2009. Now married to a local boy, she says she feels “a little bit in the middle” of the two countries.

“My parents are based here now and I have lived here for the last six years but my home is always Israel,” she said.

Dundas's first collection was notably short of the kind of full length red carpet gowns that made the brand's reputation.

“My first task since arriving here has been to think of something different that still maintains the soul of Roberto Cavalli,” he said. “Today's women are freer and looking for easier, perhaps more sporty clothes.”