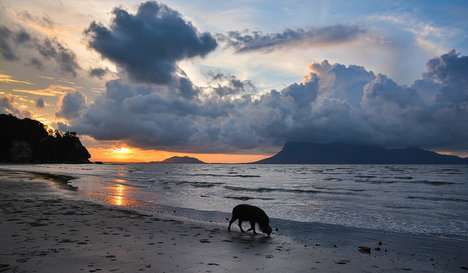 The wild boar was caught on camera 6km off the Puglian coast by amateur fishermen. Photo: Julien Nakos/Flicker

The amateur fishermen had taken their recreational boat out for a spin when and were stunned to see the creature on the high seas.

They captured the moment in the video below.

After numerous passes with their boat the fishermen managed to haul the animal aboard to safety, but had to endure a nerve-wracking journey with the beast to bring it back to shore.

“We tried to bring it back to the shore – and we eventually managed it – but the boar was very afraid and kept attacking our boat,” wrote one of the fishermen, who uploaded the video on YouTube.“Once we got it to dry land it ran off into the pine forest – it was amazing.”

“I hope the boar realizes that hunting season has started though,” added the fisherman.

The incident comes at a time when an explosion in the population of wild boars is causing a headache for many regions across Italy and there have been a number of people killed in incidents involving the animals.

Pigs and boars are often believed to be unable to swim – as it is thought that the circular motion of their trotters will cut their own throats – a fact the video proves to be a myth.