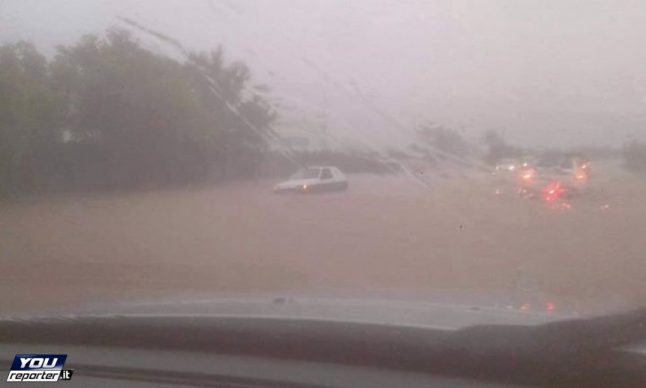 Between Wednesday night and Thursday morning, the whole island was battered by strong winds and high rainfall, causing widespread damage.

In the north-easterly province of Nuoro, five families were evacuated from their homes in Torpè. While in the southerly province of Cagliari roads were flooded around Capoterra, Unione Sarda reported.

Italy's Civil Protection raised has raised the hydrological risk warning to 'very high' for the next 24 hours. Experts say the area along the River Solanas poses the greatest flood risk.

In light of the warnings, the governor of Sardinia, Francesco Pigliaru has flown back from Paris to help co-ordinate a response to the emergency as the islanders battened down the hatches and waited for the storm to hit. Black clouds announced the arrival of the cyclone. Photo: Takeshivago/Youreporter

In the northern city of Olbia – where 19 people lost their lives during floods in 2013 – mayor Gianni Giovannelli announced that all of the city's schools would be closed on Thursday in order to try to protect citizens from the inclement weather.

Mayor of Cagliari, Massimo Zedda, followed suit in closing all schools, but went further by closing all parks, communal offices, nurseries and cemeteries in the Cagliari area on Thursday.

“In light of the deaths we've seen from floods you can never be too careful,” he told Unione Sarda.

So far, the damage has been limited to a few isolated floods – but with more rainfall and strong winds forecast for the next 12 hours the island's citizens are bracing themselves for the worst.

Mediterranean cyclones are rare extreme weather events that can have a radius of up to 200km bring winds of 144km/h. They can last anywhere between 12 hours and five days.