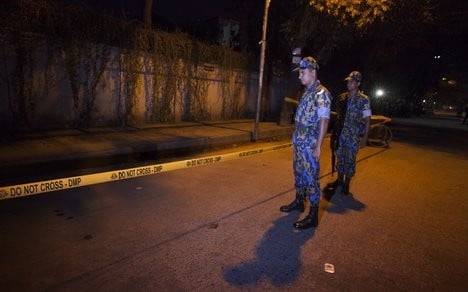 Police guard where the man was shot dead in the Gulshan area of Dhaka, Bangladesh. Photo: Stringer/AFP

Hasina said that the militants did not kill Cesare Tavella, 50, and that his murder, as well as the separate killing of Kunio Hoshi on Saturday, were carried out by “internal Bengali opposition”.

Tavella died in hospital after he was shot three times by attackers, who fled on a motorcycle, in the Gulshan area of Dhaka last Monday.

Cesare worked for ICCO Cooperation, a global development agency that has offices in Bangladesh.

Hoshi was gunned down in northern Bangladesh on Saturday, with Isis also claiming responsibility, according to Site Intelligence Group.

Hasina was speaking during a press conference in Dhaka on Sunday, and added that the attacks were “clearly planned and politically motivated”.

She noted that the killings coincided with a trial against opposition leaders for war crimes, and that the murders were inspired by the Bangladesh Nationalist Party (BNP).

Bangladesh prides itself on being a mainly moderate Muslim country. But the gruesome killings of a series of atheist bloggers this year rocked the country and sparked a crackdown on local hardline Islamist groups.