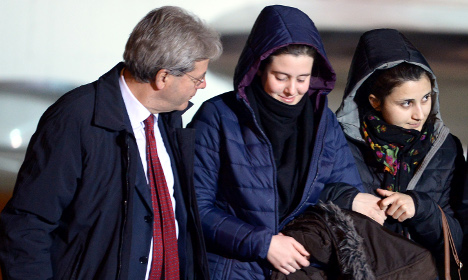 Citing judicial sources in the Syrian city of Aleppo, the Italian news agency said that one of the people involved in the negotiations, Hussam Atrash, was convicted by an ‘Islamic Tribunal’ of the Nureddin Zenki Movement for receiving almost half of the ransom money.

Greta Ramelli, 21, and Vanessa Marzullo, 22, were abducted in Abzimo in July 2014 and released in January. They had been working for the aid group Horryaty at the time of their abduction.

Italy’s Foreign Minister Paolo Gentiloni said after their release that suggestions that Italy had paid a ransom to the Syrian branch of Al-Qaeda were based on “unfounded rumours” emanating from terrorist organizations which should not be given any credence.

Ansa obtained a copy of the October 2nd conviction by the Nurredin Zenki Movement’s Qasimiya tribunal in Atareb, which said that Atrash received €4.5 million of the ransom money, while the remainder was split between local warlords.

Italy has a track record of paying ransoms to gets its citizens home safely, an approach which has been controversial with some of its Nato allies, chiefly Britain and the United States, who argue that handing over cash only encourages further abductions and can end up funding terror attacks.

In theory, the country signed up to not paying ransoms at a Nato summit in September 2014 but media reports suggested money changed hands when Italy secured the release of two construction workers held in Libya last year. Italian officials were able to portray the kidnappings as essentially criminally motivated rather than being the work of hardened terrorists.