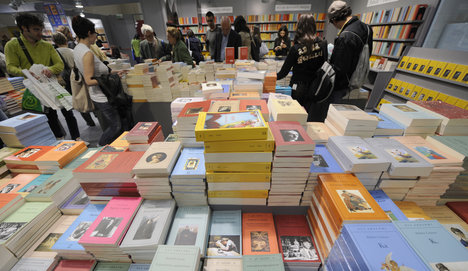 The spectacular snub provoked outrage from the Saudi ambassador to Italy, Rayed Krimly.

Krimly appealed to Italy not to meddle in his country's “internal affairs” and not to try to give lessons on human rights, Corriere della Sera reported.

Krimly invited “those who show a keen interest in human rights to deepen their knowledge with the detailed facts of the case,” before going on to list the crimes al-Nimr had been convicted of by the Saudi Arabian government.

But the planned execution of al-Nimr, who is set to be beheaded and crucified any day now, has been met with condemnation around the world.

He was arrested in 2012 after taking part in a pro-democracy protest while aged just 17. He was handed the death penalty in May 2014.

Many voices in the western press suggest he was sentenced to death in order to set an example and have pointed out that much of the evidence against him stems from an interview with a religious cleric.

The International Book Fair in Turin has been running since 1988, and was visited by 341,000 book fans last year, making it the second largest book fair in Europe after the Buchmesse in Frankfurt.

The next event will take place in May 2016, during which time publishers and authors from around the world will spend five days hosting a number of conferences, book launches and other literary events which are open to the public.

While it was announced that Saudia Arabia would no longer be the guest of honour next year, organizers said the event would still have an Arabic theme.

“Not so much is known about Arabic culture and literature, and what we know is often founded on prejudice,” explained the fair's cultural director, Ernesto Ferrero. “But it has a huge cultural and literary heritage.”

Previous countries of honour include Russia, Egypt and Israel.