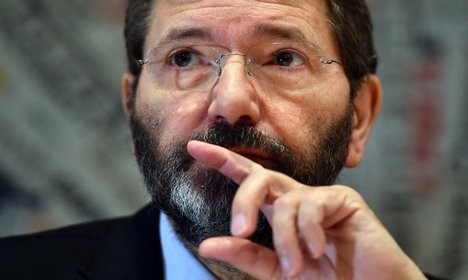 Ignazio Marino, 60, has been under intense pressure for months against a backdrop of mounting public anger over the litter-strewn and pot-holed state of the city's ancient streets, a failing public transport system and organized crime's infiltration of the municipal authority.

They are all problems which predate Marino's arrival in office. But he nevertheless surrendered his position at the helm of the Eternal City as backing from his own party wilted away with two key allies announcing their own resignations.

“I have made my decision: I am handing in my resignation,” Marino said in a statement addressed to the citizens of Rome, adding that he had lost the support of his own Democratic Party and that the “political circumstances” that would allow him to stay on no longer existed.

Under Italian law, Marino's resignation will take effect in 20 days, after which a commissioner will take charge of running the city until an election to replace him is held.

In a Facebook post earlier Thursday, Marino wrote he had agreed to pay back €20,000 ($22,600) of restaurant bills settled with a city hall credit card over the course of his two years and four months in office.

He said all the money had been spent legitimately on official entertainment but that he would cover the cost as a personal gift to Italy's financially-strapped capital.

“With this gesture I want to draw a line under the pointless and surreal polemics of recent days, which do Rome no good,” the centre-left mayor wrote.

But Marino's hopes of turning the page on the affair were dashed after newspapers then published evidence suggesting that at least a handful of the paid-for dinners had been attended only by Marino and his wife.

Before Marino decided to step down, opposition attempts to present a no-confidence motion against him had been frustrated by procedural rules. But reports soon emerged of Marino being given an ultimatum to quit by his own Democratic Party.

Deputy Mayor Marco Causi and top transport official Stefano Esposito opted to jump first with the latter saying: “This situation can only lead to the end of this administration.”

Marino's administration has been buffeted by a seemingly never-ending string of damaging stories since he was elected in 2013 for a five-year term.

These range from the revelation that he drove his Fiat Panda in traffic-restricted areas of the city with an expired permit to stories that regularly suggest Prime Minister Matteo Renzi regards his Democratic Party colleague as a liability.

Marino copped the blame when a notorious mafia figure who styled himself the “King of Rome” was given a glitzy funeral on the outskirts of the city in August, while the mayor was on holiday in the United States.

And he is routinely lambasted over the capital's crumbling infrastructure and cutbacks to bus and tram services, protesting in vain that he inherited a city in a mess and on the brink of bankruptcy.

Even Pope Francis joined the attacks after Marino flew to the United States to join the last leg of his recent tour, pointedly revealing that the mayor had not received any invitation from the Vatican and dismissing the elected official as “someone who purports to be Catholic.”

Francis is understood to have objections to the mayor's support for gay marriage and euthanasia.

But quite why the keen cyclist and former liver transplant surgeon is subject to such ire from across the political spectrum and the media remains something of a mystery.

His supporters suspect a concerted smear campaign linked to Marino's role in exposing a criminal network with links to the far right which had infiltrated itself into the municipal authority under his predecessor.

But the mayor's critics say he is simply not up to the job and some have pointed out that “Dinnergate” was not the first expenses scandal to engulf him.