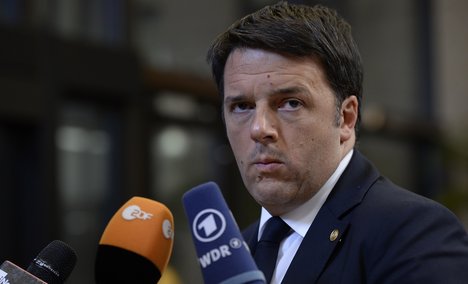 Italian Prime Minister Matteo Renzi was unhappy at statements made by the EU president comparing Italy and Hungary's handling of the refugee crisis. Photo: Thierry Charlier/AFP

Speaking at an EU leader's summit EU leaders summit , Tusk said Italy and Hungary were both guilty of breaking EU rules during the refugee crisis.

But for Renzi, there was no comparison.The far-right government of Hungary has been steadily building defences to keep refugees out, while Italians have been working hard to accommodate as many as possible.

“The words Tusk used were not the right ones. Not just towards the government but towards the Italian people too,” the premier told Corriere Della Sera after the summit.

“Over the last few months the Italian people have done an extraordinary job, saving tens of thousands of people with great care and attention.”

“When someone speaks badly about Italians – their prime minister is going to defend them,” he said, adding that Italians were “giving lessons in generosity and civilization.”

While Italy's efforts may not be appreciated across the EU, its role was praised UN Secretary General Ban Ki-Moon, who addressed the Italian Parliament on Wednesday to mark the 60th year anniversary of Italy's involvement in the UN, New Europe reported.

Ki-Moon said he wanted to “render tribute to the men and women of Italy who have saved tens and thousands of refugees.” In his address he also echoed Renzi's frequent assertions that other European countries need to do more to share the burden.

“All nations have the same duty above and beyond geographical proximity,” he told parliament.

Italy is currently the top troop contributor to the UN and is aiming to become the largest provider of foreign aid in the G7.