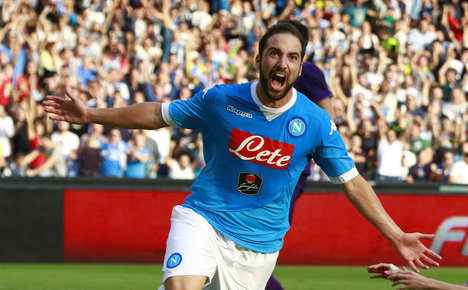 After Inter drew with Juve, Fiorentina stayed top of Serie A in spite of losing to Napoli, for who Gonzalo Higuain bagged the winner. Photo:Carlo Hermann

Fiorentina have emerged as contenders for a top finish this season thanks to a series of fine performances under new coach Paulo Sousa, including a 4-1 humiliation of Inter three weeks ago.

But La Viola suffered only their second defeat of the campaign earlier Sunday when Lorenzo Insigne and Gonazalo Higuain hit their sixth league goals of the season respectively to secure a 2-1 win at the San Paolo stadium, where Nikola Kalinic had levelled two minutes before Higuain's 75th minute strike.

The pain of that defeat was soothed by the fact Fiorentina will stay top for another week after Inter failed to break down a stubborn Juve side in the 'Derby d'Italia'.

But despite dominating a one-sided opening half that notably saw Marcelo Brozovic fire off the woodwork, Roberto Mancini's men failed in their quest to beat Juve at the San Siro for the first time since 2010, when Jose Mourinho led the Nerazzuri to an unprecedented treble of league, Cup and Champions League.

In the end, Mancini could have few complaints, especially seeing the woodwork save Inter when Sami Khedira struck it in the second half.

“It was a tough game, difficult for both sides. It wasn't easy to create chances and there weren't so many in the end,” said Mancini.

“It was an important game because winning would have reinforced what we've achieved so far this season and pushed Juve further out of the equation. But we have to settle for a draw. It was the fair result.”

Inter remain third just behind Roma on 17 points, with Napoli, Sassuolo and Lazio all two points further back.

Three days before hosting Borussia Moenchengladbach, looking to claim their third consecutive win in the group stages of the Champions League, Juve coach Massimiliano Allegri was buoyed with a performance that he believes has reminded Juve's rivals they are not finished yet.

“I don't know if we will win the league title this season but we'll be in the mix,” Allegri said.

“Right now, we can't pay too much attention to results but by Christmas I want us to halve our deficit and by March want us to be close to the top of the league.

“To do that we need consistency, and to start scoring more goals. A team that doesn't score won't win the league title.”

Napoli welcomed Fiorentina to the San Paolo looking to maintain a recent purple patch that has seen Mauricio Sarri's side remain unbeaten in their last six outings.

Fiorentina were tough customers, but after Kalinic had levelled Insigne's superb opener for the hosts, Higuain struck in the 75th minute to secure Napoli's fourth win of the campaign.

Napoli, runners-up in 2013 and who won the last of their last two league titles in 1990, have recently been touted as possible scudetto challengers.

But Sarri refused to be drawn on just how far Napoli can go.

“Obviously we're doing well, but there is so long to go and we have to simply focus on developing as a team,” he said

Sousa, too, was quick to stress he is looking at short-term objectives.

“You can never be satisfied, we're always working to improve, but I'm proud of the lads and their attitude to this game and a team that is technically and physically strong,” said Sousa.

“For me, creating this winning culture is (equivalent to) winning the scudetto.”

Elsewhere, Sampdoria's promising start came to a shuddering halt with a 2-0 defeat at Frosinone, while Lazio were stunned 2-1 away to Sassuolo.

Atalanta, meanwhile, romped to 3-0 win over Carpi in Bergamo that came complete with a stunning corner kick goal from Alejandro Gomez.