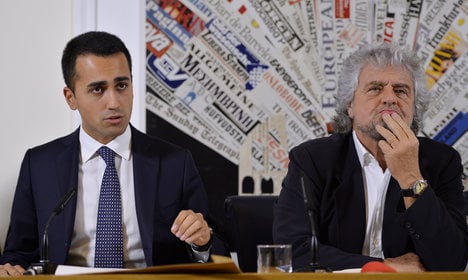 At a weekend conference in the town of Imola, “Grillini” activists were in confident mood, buoyed by a recent upturn in their standing in the polls and their central role in ousting the mayor of the Italian capital.

“If we can take the mayor's seat in Rome, we will be governing the country inside 10 years,” Grillo told the conference in markedly more measured tones than he customarily employs.

Earlier this month, Rome mayor Ignazio Marino, a member of Prime Minister Matteo Renzi's Democratic Party, was forced to resign over an expenses scandal and a vote on his replacement is expected early next year.

Five Star surged from nowhere to claim 25 percent of the popular vote in Italy's 2013 elections. But the party then saw a dip in its fortunes as voters seemingly tired of its founder's strident, ranting style.

Support has picked up recently as Grillo has taken more of a back seat and pushed younger figures such as Luigi Di Maio, the 29-year-old deputy speaker in the Chamber of Deputies, to the fore.

An endless round of requests for selfies at the Imola conference told its own story about how the smartly-dressed Di Maio has become the leader-in-waiting of a movement that supposedly has no bosses and refuses to be seen as just another political party.

Despite that, and its self-styled “post-ideological” character, the movement counts 91 deputies, 36 senators and 17 MEPs among its ranks, alongwith 11 mayors and around 1,000 local and regional councillors.

Activist Antonio, a 50-year-old from Naples who joined up after becoming disillusioned with the left, says the movement is at a crossroads.

“We are at a crucial moment in the history of the movement. What gets decided from now will be fundamental,” he told AFP.

The weekend conference saw Five Star take over Imola's legendary motorsport racetrack for debates on how to rebuild Italy and the European Union, which it does not regard with a favourable eye.

In theory the movement still supports withdrawal from the euro, but talks about the issue far less in the aftermath of Greece's bungled attempt to use the implied threat of withdrawal to renegotiate the terms of its debt with international creditors.

Five Star is a broad church. But where all the Grillini agree is in their shared mistrust of established politicians and their desire for greater transparency in a country weighed down by corruption, action in favour of the environment and a vaguely-defined sense that things could be organised more efficiently.

“If the movement has an ideology, it would be dignity,” sums up Raffaele Rossi, who hails, like many of the activists, from the impoverished south of Italy – in his case from Salerno, near Naples.

As with any opposition movement trying to make the transition to governing, the question of how to avoid power corrupting is an ever present one for Five Star followers.

Antonella Laricchia, 29, a regional councillor in Puglia on Italy's heel, says Five Star's own internal rules are a model.

No elected official can serve more than two terms and each salaried one has to pay half his or her salary to the party to finance support for small companies.

Founded online in 2008, the movement has not totally abandoned its vision of direct democracy.

Its guru on such questions, Gianroberto Casaleggio, reaffirmed at the weekend that all the party's candidates, including for prime minister, will be chosen by its digital network.

Di Maio and Roman deputy Alessandro Di Battista however stand out as leading lights of the movement and potential successors to Grillo.

“We know how to oppose things, now we have to show we also know how to govern,” Di Battista said. “And if we can run Rome well, we can do the same for the country.”