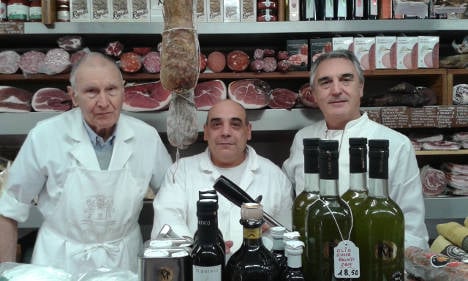 Massimo Ciavatta (right) and his colleagues at the family-owned butchers in Rome. Photo: Angela Giuffrida

Cured and processed meats are as bad for you as cigarettes, alcohol and asbestos, the WHO said in the study.

Food items such as salami, ham, sausages and bacon were ranked in the highest possible category as being cancer-causing, while red meat was grouped in the next level as being a “probable carcinogen”.

The organization's latest report suggests that having just 50g of processed meat a day – less than two slices of bacon or one sausage – increases the chance of developing colorectal cancer by 18 percent.

But while the consumption of sausages, ham and other processed meats has long been suspected of causing colon cancer, it is the first time that the WHO has said that there is “sufficient evidence” to make the link.

“For an individual, the risk of developing colorectal cancer because of their consumption of processed meat remains small, but this risk increases with the amount of meat consumed,” Dr Kurt Straif, the head of the WHO's International Agency for Research on Cancer's (IARC) Monographs Programme said in a statement.

“Each 50-gram (1.8-ounce) portion of processed meat eaten daily increases the risk of colorectal cancer by 18 percent. In view of the large number of people who consume processed meat, the global impact on cancer incidence is of public health importance,” he added. Although the results might get people to tweak their diets a little, they are not enough to encourage meat-eaters in Italy to alter long-held habits, according to Massimo Ciavatta, a butcher in central Rome.

“It’s obvious that eating lots of ham and salami each day could cause problems,” he told The Local.

“But Italians have grown up with meat, whether it’s a slice of salami here and there or a ham sandwich – my parents ate meat almost every day – my dad lived until he was 97 and my mother 91.”

The butcher's shop has been in the Ciavatta family for 60 years, over which time Massimo has witnessed “cyclical” changes among Italian dietary habits, with people at times eating less red meat and more white meat.

“It fluctuates – at one stage, chicken wasn’t so good so less people bought it, and when the economic crisis was really bad people bought less red meat to save money.”

Ciavatta said it was also important to distinguish between the quality of meat and where you source it from.

“Ten sausages squashed together in a package from a budget supermarket are unlikely to taste good, let alone be healthy.”

Marco Bruno, another butcher, concedes that there might be an element of truth in the study, but says the important thing is to be savvy about the quality of the meat you buy and how much you eat.

“It’s difficult for consumers to be aware of this, but it all depends how the cattle is raised and the farming techniques used,” he said.

He also pointed to the growth of ‘food fraud’, which affects a wide range of Italian products, from cheese to wine and cured meats, and costs the economy billions.

“There’s a lot of fake Parma ham out there, for example, and other products with a ‘Made in Italy’ label that won’t be from here.”

Far from being put off eating meat, Carmine Pinto, the president of the Italian Association for Medical Oncology, said the study was an invitation to refocus attention on the benefits of the Mediterranean diet, which studies have shown may reduce the risk of getting cancer.

“The data today confirms what we’ve known for a long time, that the presence of preservatives and combustion products in processed meats are linked to certain types of cancer,” Pinto was quoted by Ansa as saying.

“As for red meat, it’s a question of how it’s made and the quality – there is no definite ‘exposure threshold’ above which eating red meat will make you sick.

“The message we need to give is that red meat should be eaten in the right way, once or twice a week.”

Consumers themselves, or at least the ones who spoke to The Local, were not alarmed by the results.

“I think it’s been a little exaggerated,” said Alessio.

“It all depends on how much you eat – it’s like sugar, cheese or alcohol – everything is considered bad for you in large qualities. It’s all about lifestyle and having a balanced diet.”

Luca, a delivery man in Rome, scoffed at the notion of giving up meat, before regaling everyone within earshot about the “best ever steak” he ate at the weekend in Leonessa, a town in the Lazio province of Rieti.

As well as the salami-loving Italians, the new guidance is bad news for most Europeans, including the jamón obsessed Spaniards, wurst-gobbling Germans, hot-dog-loving Swedes and the saucisson-scoffing French.