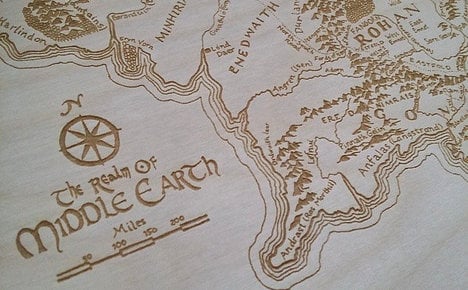 An map annotated by J.R.R Tolkien states that the Italian city of Ravenna is the inspiration for Minas Tirith. Photo: HyperXP/Flickr

The rare map was found inside a copy of a trilogy which once belonged to the late illustrator Pauline Baynes.

In 1970, Baynes collaborated with Tolkien to produce a map of Middle-earth –  the fictional continent on which the action takes place – for the publishing house Allen & Unwin.

Tolkien's annotations in green ink and pencil on the 16.5 by 18.5 centimeter map make reference to several real cities and towns, including one notable Italian example.

“The [Italian] city of Ravenna is the inspiration behind Minas Tirith,” reads one annotation, while another states that Hobbiton, the fictional home of the characters Bilbo and Frodo Baggins “is assumed to be at the latitude of Oxford”.

The map is on sale at Blackwell's Rare Books in Oxford and is expected to fetch some €83,000.

Clearly impressed, Sir Ian Mckellen, the actor who portrayed the wizard Gandalf in the film series, tweeted a pic of the map earlier this week.

“Perhaps the finest piece of Tolkien ephemera to emerge in the last 20 years.” https://t.co/n4UT0FmlMh pic.twitter.com/v7VxzmwuEW

But how similar are the cities of Ravenna and Minas Tirith?

In the books, Minas Tirith is a heavily fortified hilltop town, which serves as the capital of the fictional realm of Gondor, the final stronghold of the goodly 'men of the west'.

In an interesting parallel Ravenna was the final capital of the Western Roman Empire between 402-476 AD. Though the hilltop Ravenna, with its heavily buttressed basilicas, medieval porticoes and lavish byzantine mosaics may have provided the inspiration for Tolkien's city – Minas Tirith has an altogether more dramatic appearance. A model of Minas Tirith based on a drawing by Tolkien. Photo: Michele Li /Flickr

Ravenna was not used as the inspiration for Minias Tirith in the film series by director Peter Jackson – where the computer-generated imagery of the fictional city was based on the real-life French island monastery of Le Mont Saint Michel.