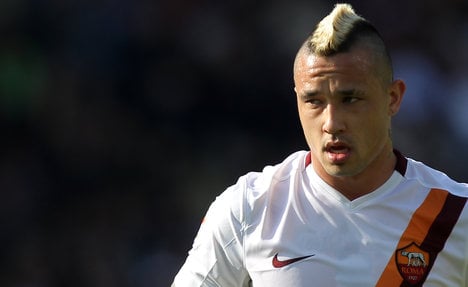 Roma ace Radja Nainggolan (above) thinks Roma will need to beat Bayer Leverkusen to qualify for the last 16 of the Champions League. Photo: Marco Bertorello/AFP

After a mediocre start to their campaign, Rudi Garcia's men sit bottom of Group E with just two points from three games.

With BATE Borisov and Leverkusen just one and two points ahead of them respectively, Roma's hopes of reaching the competition's knockout stages for the first time since the 2010-11 season are not over yet.

But defeat to Leverkusen would mean Roma would have to win their final two group matches – including away to leaders Barcelona – to have any chance of progressing.

With the city derby this Sunday it is a crucial week for the Giallorossi, who sit third in Serie A just a point behind leaders Fiorentina and second-placed Inter Milan.

But Belgian international Nainggolan said all thoughts of beating Lazio have been put to one side as they set about reviving their last 16 hopes at the Stadio Olimpico on Wednesday.

“We have to think about the Champions League game first, Wednesday's match is crucial,” Nainggolan said after Roma's 1-0 defeat away to Inter on Saturday.

“We have to win if we are to have any chance of qualifying (for the last 16). Then we'll turn our attention to the derby.”

Roma began their campaign in positive fashion, holding defending champions Barcelona to a 1-1 draw in the Italian capital, but struggles on their travels have complicated matters for Garcia's men.

Stunned 3-2 away to BATE, Roma dropped more points in a spectacular 4-4 draw away to Leverkusen last month.

Having gone 2-0 down at the BayArena, Roma hit four successive goals, including a brace from midfielder Daniele De Rossi, only to concede twice in the final six minutes.

Ahead of Wednesday's fixture, Roma's steady goals haul – as well as Edin Dzeko's lean spell – is also under scrutiny.

Roma's defeat to Inter was the first time they had failed to score in 25 fixtures in all competitions, but Dzeko has scored only once in 11 outings for the Giallorossi.

Garcia has defended his misfiring Bosnian striker, claiming “he needs more playing time to find his feet in the area”.

The Frenchman added he was “encouraged” by Roma's defensive performance at the San Siro last weekend, which came in timely fashion.

Leverkusen suffered a 2-1 defeat at Wolfsburg on Saturday when Nicklas Bendtner hit a clearly offside opening goal for the hosts.

But ex-Manchester United and Real Madrid striker Javier Hernandez has hit great form of late, scoring six goals in his last four games, including a brace in the 4-4 draw a fortnight ago.

Leverkusen's sporting director Rudi Voller, who scored 45 goals in 142 Serie A appearances for Roma in 1987-1992, said he “can't wait” to return to the 'Eternal City'.

He believes Roma “can win the scudetto” this season but is more focused on Leverkusen's chances of claiming at least a draw on Wednesday.

“If we don't lose at the Olimpico it will give us a boost in terms of qualifying for the last 16, but it will be a difficult game,” he said in an interview with www.gazzetta.it.

Roma welcome De Rossi back to the fray after he sat out the Inter game but will still be missing iconic captain Francesco Totti, who has not played since suffering a thigh injury against Carpi in September.