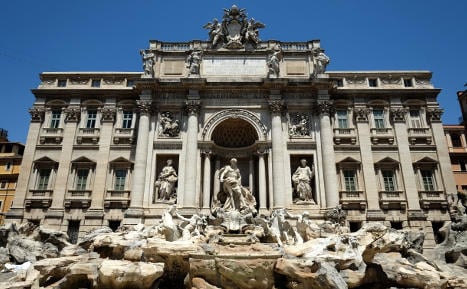 Crowds of frustrated tourists have spent months peeking at bits of the monument from a special walkway put in over the fountain while repairs were carried out to the tune of over €2.0 million ($2.2 million).

The basin was drained 16 months ago but the most determined visitors could still be seen slinging coins over their shoulders – a tradition which is said to ensure a return to Rome – in the hope of getting them into a small substitute pool.

Now the fountain, made famous by a scene in Fellini's “La Dolce Vita” in which Anita Ekberg wades through its pristine waters, makes the surrounding buildings in Rome's historic centre look decidedly shabby.

German fashion designer Karl Lagerfeld – Fendi's creative director, famed for his dark glasses, leather gloves and shock of white hair – is expected at the scene for the moment the taps are turned back on at 5pm local time.

Water will once more cascade from the base of the fountain's sea-God scene to the delight of snap-happy tourists as the Italian house's designer Silvia Venturini Fendi and CEO Pietro Beccari look on.

The nearly 300-year-old monument, visited by millions of tourists every year, hit the headlines in 2012 after bits of its elaborate cornice began falling off following a particularly harsh winter.

Emergency repairs cost €320,000, and a survey of the monument found that more critical work was needed, prompting a cash-strapped city hall to appeal to large companies and donors for funding. Fendi answered the call.

The company, founded as a leather goods business in Rome in the 1920s and now part of French luxury giant LVMH, signed up to a deal which allows it to hang a plaque near the monument for four years.

It also funded the restoration of the Quattro Fontane – the late Renaissance fountains which grace each corner of a busy intersection in the capital.

It was not the only fashion house to leap to the aid of the eternal city's ailing monuments: luxury jeweller Bulgari has begun cleaning up the city's famous Spanish Steps, while shoemaker Tod's is financing works at the Colosseum.

The Trevi Fountain, commissioned by Pope Clement XII in 1730, is the end point of one of the aqueducts that supplied ancient Rome with water and was last restored 23 years ago.

The Acqua Vergine runs for a total of 20 kilometres and ends up in the fountain, where tourists can drink it from a special tap tucked away at one side of the monument.

Legend has it the water source was discovered in 19 BC by thirsty Roman soldiers guided to the site by a young virgin — hence the name, Virgin Waters.

The tradition of throwing coins into the fountain was made famous by Frank Sinatra's rendition of “Three Coins in the Fountain” in the 1954 romantic comedy film of the same name.