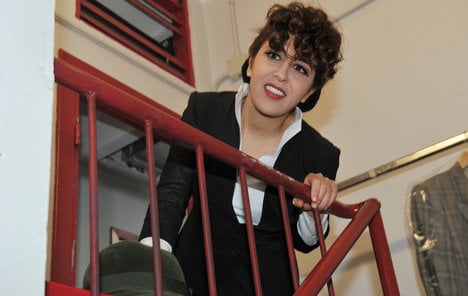 Two books by the investigative journalists set to be published Wednesday claim charity money was allegedly spent on refurbishing the houses of powerful cardinals, while the murky Vatican bank continues to shelter suspected criminals.

Suspected moles – PR expert Francesca Chaouqui and Monsignor Lucio Angel Vallejo Balda – arrested at the weekend for allegedly stealing and leaking classified documents, risk up to eight years in prison if the case gets to court.

There was no official confirmation they had passed confidential information to journalists Gianluigi Nuzzi and Emiliano Fittipaldi, but the Vatican on Tuesday published a statement on the arrests which also slammed the books.

While Vallejo Balda languishes in jail, Chaouqui, 33, was released after assuring investigators of her cooperation in a case which has thrown light on Pope Francis's struggles to clean up a centuries-old institution unwilling to give up its privileges.

“I am totally innocent and I'll prove it,” La Stampa daily quoted the dark-haired woman dubbed a “sex bomb” by Italian media as saying, adding that Vallejo Balda “did everything, I tried to stop him”.

The recording and publication of the pope's private conversations “is the most controversial aspect of all the dust blown up by the second Vatileaks,” the Repubblica daily said, comparing the scandal to a similar one three years ago.

Then, it was Pope Benedict XVI's butler who leaked documents revealing fierce infighting in the highest echelons of the Church and allegations of serious fraud. He was sentenced to 18 months in prison, before being pardoned by the pope but banished from the Vatican forever.

In wiretaps transcribed in “Merchants in the Temple” by journalist Nuzzi, Francis can be heard asking, “if we don't know how to look after money, which we can see, how can we look after the souls of the faithful, which we cannot?”

The pope also tells people described as “collaborators” by Nuzzi that “the costs are out of control”.

He told a press conference on Tuesday that former Vatican secretary of state Cardinal Tarcisio Bertone redirected funds from a Vatican-run hospital to do up his loft apartment and ran up outlandish expenses including a €23,800 ($26,400) helicopter ride in 2012.

Fittipaldi also said he had access to documents showing that the Saint Peter's Pence offerings sent to the Vatican from parishes around the world – totalling some €378 million in 2013 – ended up in an account used largely to pay for Vatican bureaucracy rather than for charitable purposes.

A Vatican statement Monday denounced the upcoming works as “fruit of a serious betrayal of the pope's trust” and said it was considering legal action.

Religious experts said the leaks may have been motivated by frustrated ambitions, with Vallejo Balda, 54, publicly passed over for promotion and Chaouqui frustrated in attempts to climb the Vatican's social ladders.

In a Facebook post on Tuesday Chaouqui denied leaking “even one piece of paper” and said “there is nothing I have ever loved more or defended more than the Church and the pope”.

The former Ernst & Young lobbyist was selected to be part of a special commission set up by Pope Francis to advise him on economic reform within the Church – an appointment which raised eyebrows in 2013 after it emerged she had been highly critical of the Vatican on Twitter in 2012.

Tweets – which she claimed were written by a hacker – included one which said Pope Benedict had leukaemia, one which said high-ranking Cardinal Tarcisio Bertone was corrupt and one which accused a former Italian minister of being gay.

The Vatican's embarrassment only increased when racy photos of her went viral on the Internet.

There were immediately questions as to whether Chaouqui, who has Moroccan origins, might be behind a rumour last month, denied by the Vatican, that Francis has a benign brain tumour.

The trained lawyer, who is reportedly pregnant, hit the headlines again in 2014 when she was suspected of having organised a lavish party for the rich and famous on a Vatican terrace at the Holy See's expense.

It was Vallejo Balda who reportedly provided communion for 150 VIPs from a gaudy crystal cup – much to Francis's fury.

Francis was tasked by his cardinal electors to stamp his authority on the bickering Curia, the Church's governing body, and clean up the Vatican bank – but the fresh leaks looked set to fuel criticisms of his reform programme.