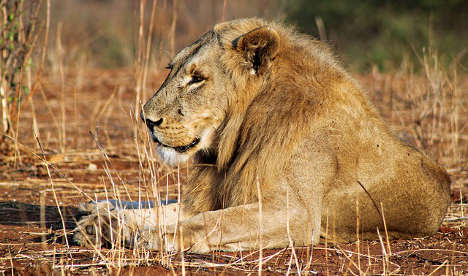 The lion was killed during a safari in Tanzania. Photo: Pius Mahimbi

A press spokesman for Luciano Ponzetto, a big-game hunter who manages a veterinary clinic near Turin, told The Local that action would also be taken against the media that picked up on the story, which he said had potentially damaged the vet's reputation and was “not in the public interest”.

Ponzetto defended himself, arguing that being a vet “is not incompatible with hunting, either morally or professionally.”

He was hit by a hate campaign when someone recognized him in the photo posted on the Facebook page of Safari Italian Chapter, the group which organized the safari in Tanzania.

The photo rapidly circulated online, with some social media commenters suggesting Ponzetto be killed in revenge, the spokesman said.

“Some of the comments were very severe,” he added.

“We will try and take action against these people and the media who wrote it without considering whether or not the story was in the public interest.”

Activists from Animal Rights Front posted signs outside Ponzetto's clinic in the town of Caluso, with one saying ‘Paid to save lives, he gets off on killing’, as they protested overnight on Wednesday. The protest had petered out by Thursday afternoon.

Italy’s Veterinarians' Guild also defended Ponzetto, saying in a statement that “hunting is a hobby regulated by the law, which does not allow us to take measures against him.”

The protest echoes the international uproar sparked this summer after an American dentist, Walter Palmer, killed one of Africa’s iconic lions during a big-game hunting expedition in Zimbabwe.

Palmer faced prosecution for having lured the lion, called Cecil, out of a national park and killing him with a bow and arrow in an area where it is illegal to hunt.

Palmer, who reportedly paid around €45,000 for the expedition, said he had relied on professional guides to find a lion and obtain permits and that he only found out about the lion’s identity after the hunt. The charges against him were dropped by Zimbabwean officials in mid-October.

The Italy protest was likely to have been exacerbated by the outcry over Cecil the lion, still fresh in the minds of animal lovers.

“But the difference is the American dentist was hunting in an area where he shouldn’t have been hunting,” Ponzetto's spokesman said.