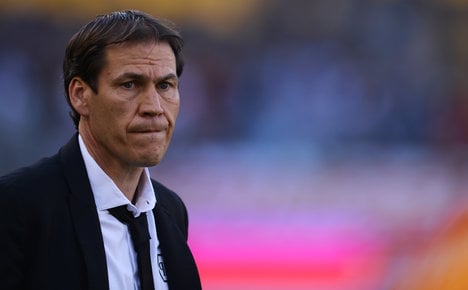 Winless after three opening Group E games, Roma needed a late penalty as they beat Bayer Leverkusen 3-2 to revive their hopes of reaching the last 16 for the first time since 2010.

Roma dominated the first half but their fans were put through the ringer before Bosnian midfielder Miralem Pjanic scored a tense 81st minute spot-kick to secure all three points for the hosts.

Roma's first win in the group moved them up to second place on five points, five behind leaders Barcelona, one ahead of Leverkusen and two ahead of BATE Borisov.

However, Garcia said his side's failure to kill off Leverkusen in the first half could have proved costly. Their next game is away to Barcelona in three weeks.

“We should have gone in for the half-time break at least three or four goals ahead,” said the Frenchman.

“By the 50th minute we realised how costly those errors were. There was a five-minute blackout at the start of the second half in which we lost all the intensity and concentration we'd had in the first.

“It will serve as a lesson for us but thankfully we come through unscathed.”

With Roma needing a win to have any realistic chance of reaching the knockout phase, Mohamed Salah's second-minute strike settled early nerves at the Stadio Olimpico after he ran on to Edin Dzeko's through-ball to bundle past visiting 'keeper Bernd Leno.

Roma doubled their lead before the half-hour when Dzeko hit only his second goal for the Giallorossi and his first in the Champions League since November 2013.

Afterwards, the Bosnian – whose only previous goal for Roma came in a 2-1 win over Serie A champions Juventus on August 30th – admitted it was time to reverse his own sorry trend.

“I'm a striker and people expect you to score goals. That's my job. I definitely have to do better in the future,” he said.

Roma were cruising and should have added third and fourth goals when Egyptian winger Salah was twice set free down the right flank, only to fumble his final touches when both Dzeko and Gervinho were in scoring positions.

Two weeks after the sides' dramatic 4-4 draw at the BayArena, Roma were stunned in five second-half minutes when Admir Mehmedi and Javier Hernandez capitalised on spectacular defensive lapses to pull Roger Schmidt's visitors level six minutes after the restart.

Roma were shaky for the remainder of the second half but were handed a lifeline when Leverkusen captain Omer Toprak saw red late on for pushing Salah into the net as he was about to pull the trigger at the far post.

Russian referee Sergei Karasev pointed to the spot and Pjanic stepped up to beat Leno for a 3-2 lead nine minutes from the final whistle.

Pjanic said: “We should have wrapped this match in the opening half. We had so many opportunities on the counter-attack that we didn't capitalise on.”

Coach Garcia was relieved but Roma risk losing second place to Leverkusen if the Germans win against BATE Borisov in three weeks' time and Roma fail to beat Barcelona.

“Next we're going to Barcelona and it will be a really difficult game. If you look at the table, perhaps a draw or a defeat won't change much,” he said.

“But since everyone already sees us losing that game, we'll do everything we can to reverse the predictions.”